Drawing Brendan Fraser‘s caricature was a decision driven more by my desire to capture his clean bright looks than by his popularity. The fact that his Wikipedia page scrolls to just two page-heights tells me that he isn’t as famous as I think he should be, but then, the point is, he is still young – and he’s got about 30 years worth of movies left in him. I don’t believe he’d stop acting before he turns seventy!

Here’s Brendan Fraser, George of the Jungle (Tarzan?), with a short-haircut (why can’t he have short hair – he’s got a well-supplied cabin – doesn’t he?), looking at Ursula (Jane?) for the first time. Doesn’t he look smitten?! 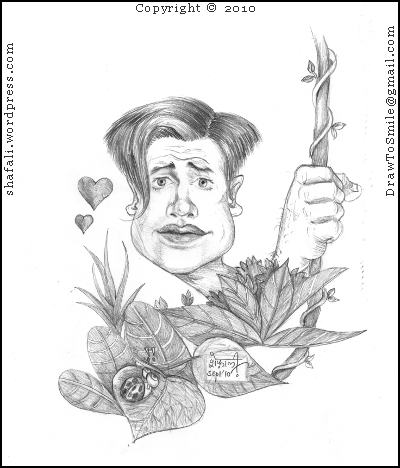 Now who's that? George's very own Gorgeous?!

Brendan Fraser, the Hollywood actor, is a Canadian-American, who was born on December 3, 1968, in Indianapolis, US. His acting career began when he was twenty. In the last twenty years Brendan has worked in more than 30 movies. Fraser was married to actress Afton Smith for fourteen years (a rather long marriage by the Hollywood standards.)

Some Brendan Fraser Movies that you should Watch:

Other Interesting Links for Brendan Fraser: