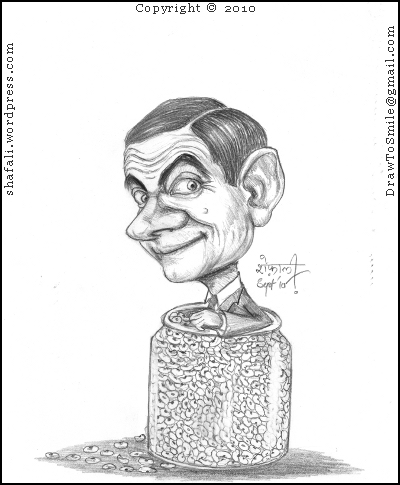 For all I know, Mr. Bean could be the most caricatured celebrity ever! The web is full of his caricatures, and mine is going to be just another one of them. I’ll be honest with you. Not doing Mr. Bean’s caricature was like…well, not eating chocolate. Everyone I know eats chocolate, except my dog and I. Similarly Everyone who can draw makes a caricature of Mr. Bean – in fact, most of the times, you don’t even have to make the effort of exaggerating his features…you just draw his portrait and you are done!

For those of you, who haven’t known this paradox in a tweed coat, here’s…

The Shortest Biography of Rowan Atkinson a.k.a. Mr. Bean, on the Web!

Rowan Atkinson was born on 6th January, 1955 in the Durham County of England. Being a Jan-born, he obviously stuck with safer career options than acting, and studied to become an Electrical Engineer. Things would’ve been different if the acting-bug hadn’t bit him. But it did, and despite his obvious disadvantage of having been born a Capricorn (a goat if you please) he managed to become a comedian. He began his career with Radio Comedy Show called “Atkinson People“. Then he worked with Angus Deayton as a comic, to form a comedy duo where Angus was the straight man (in a different sense of the word.)

Atkinson worked on many different TV serials (sitcoms). Here are some of them.

Rowan Atkinson’s most famous character is of course, the unfortunate and clumsy Mr. Bean.

Mr. Bean was conceived by Rowan Atkinson while he was still at the University, however, this interesting character that keeps you balancing on the tightrope stretched between affection and irritation, was born in 1990. Technically, Mr. Bean was born on January 01, 1990, when the first episode of Mr. Bean, a British Comedy series was telecast. Mr. Bean then figured in many spinoffs and two movies, “Bean” and “Mr. Bean’s Holiday.” Mr. Bean also inspired an animated series and some books.

Mr. Bean lives with his teddy bear, who’s called Teddy. His landlady is called Mrs. Wicket and he’s got a girl-friend Irma Gobbs (View picture here – can you guess who’s who?), with whom he mis-manages his relationship, to the delight of his viewers. Mr. Bean is utterly clumsy.He doesn’t understand the social norms that so tightly bind normal people like you and me, and so he ends up enjoying himself, often on the cost of others. Mr. Bean doesn’t talk much. Yet he combines a lot of mumbling and stuttering with his stumbling and fumbling!

14 comments on “Caricature/Cartoon of Rowan Atkinson as Mr. Bean!”

It’s good to receive a real, physical, tangible certificate in this digital age. This story is important to me because it was written at the end (hopefully) of a dark chapter in my life. It’s a story of hope and friendship in a dystopian world. I am honestly surprised that it turned out ok. @barbstrips @artieq_1 @amit.srivastava.art thank you. You guys were a beacon of light. #writing #dystopianfiction #writersofinstagram
Saw this heartwarming sculptural composition at the Visual Arts Gallery of India Habitat Centre Saturday evening. Forgot to post it earlier. Amazing talent. #indianartist #indianart #indianartists #visualarts #indiahabitatcentre #sculptures #artlovers #iloveart
Was at IHC last evening and loved most of the works displayed there. Here’s @goswami_shambhunath with his painting on Banaras. He’s also the one who curated the show. If you’ve not been there yet, I suggest that you visit. The show is on till May 31. #banaras #indiancontemporaryart #groupshow #visualart #indiahabitatcentre #art #artists
“I am all ears.” Back to my regular routine. Back to work. Would love to thank everyone who visited my art show and shared their feelings. Thank you. You were the life of the show. #art #ears #doglovers
It ends today. It was fun :) #art #artshow #indiahabitatcentre #delhievents #oilpainting
My solo show “Within” is currently on at the Open Palm Court Gallery, India Habitat Centre, Lodhi Road, New Delhi. It started yesterday and shall go on till 8 pm May 11th, 2022. It has twenty of my oil paintings on display.. If you are in Delhi during this time, do find time to visit. I’ll be at the venue and would love to receive you. #art #artexhibitions #artshows #delhievents #fineart #oilpainting #indiahabitatcentre #delhievent #paintings #artcollectors #artcollector #artlovers #indianart #indiancontemporaryart
Found this on the sidewalk. Can you tell what it is? What’s your guess? #puzzle #question #lostandfound #quiz #quizinstagram
A 6” sq swatch from the 4ftx5ft painting I am working on for my upcoming show. #oilpainting #art #artistsoninstagram #indianartist #faces #wrinkles #artshows #delhiexhibition #artexhibitions
A view of my Doodle Park where I make my park doodles :) #park #doodleart #doodles #doodlesofinstagram #goodmorning #sketching
The Joker’s Joker - his alter ego with whom he shares all his sordid plans. #joker #joaquinphoenix #psychology #psychopath #hollywood #moviestowatch #fear #madness #portraitdrawing #penandinkdrawing #penandink #artistsoninstagram #art #artwork #thinking #curious
Today’s #doodle. Just finished sketching, sitting here on a bench in the park. #penandink #penandinkdrawing #doodles #shafalianand #trees #hills #hillshaveeyes #livingwithnature #thinking #life #youandme #world #ukrainewar #sadness
Went to a fair after 2 long years…and it was absolutely refreshing. #sarasmela #noidahaat #fairs #craftfair #india #indian #smile #postcovid #backtonormal @barbstrips you’ll love these pictures.