In my grandmother’s house there was room full of books. It wasn’t a library. The books weren’t organized. They just lay there in heaps. Kids in our family were discouraged from reading novels, because they could distract us from studies, and so that room remained out of bounds for me for a long time, but then one summer afternoon, when my grandmother was away visiting her brother’s house for their usual card-game, I sneaked in.

What I found was a treasure chest of books…some belonged to my grandfather, some to my grandmother, and some…to my father. In fact, I found my father’s English Reader from the time when he studied at Delhi’s Saint Columba’s and I laughed when I saw that he had made drawings (including a sketch of his English teacher) to cover every inch of blank space that was in it – something that I was always admonished for.

It was then, in that room, that I discovered Bram Stoker’s Dracula. I took the book to my room, and read it under the covers…and sometimes, even in the bathroom. I completed the book without getting caught – a rare feat, especially under the eagle-eye surveillance of my grandmother.

I can’t say that I am crazy about blood-sucking, foul-breathed, anachronistic vampires; but when I saw “Dracula: Dead and Loving it” I became a lot more patient towards them. If there were indeed a clumsy oaf of a vampire, so completely out of sync with the times of today; and if he really were as lovable as Leslie Nielsen was in this movie, I might consider inviting him to my Birthday party. (Did I go too far with that one?)

Here’s my rendition of Leslie Nielsen as the funniest Dracula the world has ever seen. 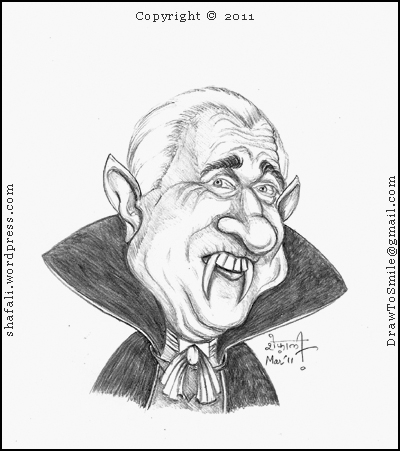 Oh, it's a mirror. I thought this is what I actually look like! 300 years in a coffin can really play havoc with your smile!!

I am at a crossroads. Should I take you through the biography of Dracula or of the charming Naked Gun Leslie Nielsen?

A bit of both, perhaps?

Count Dracula – In Fiction and In History

There indeed was a Count Dracula. Sometime during the 15th century, there lived a man so evil that he came to symbolize the ultimate in cruelty. His name was Vlad, and he became known as Vlad III the Impaler. The image that’s exploded in front of your eyes is a snapshot from the past. Vlad’s favorite form of punishment was impaling. I will spare you the gory details of the process, and also the personal history of this historical maniac – but if you are interested, you can find all about it here.

As Vlad’s family name was Dracul, he became known as the Count Dracula. The blood-sucking bits of Dracula’s story might be fiction, but it’s known that Vlad would feast in the jungle of the impaled, where he’d sit near those impaled at his orders, and enjoy a perfect meal – gloating upon the pain and misery that he had inflicted upon others. (I know…I know – he did it to those who were responsible for his father’s downfall – but I refuse to feel pity for Mr. Vlad Yikes!)

Bram Stoker wrote Dracula in the early 20th century. It’s obvious that he drew inspiration from Vlad the Sicko and the folklore of the region. His Dracula was a more colorful guy with three brides (who could be his brides or his daughters…it isn’t made clear by Mr. Stoker,) and his tendency to stick a straw in any human neck that he chances upon.

Leslie Nielsen was a Hollywood actor and comedian. He acted in numerous parody movies (movies that parody other movies) but he is best known for his Naked Gun series in which he played the part of Frank Drebin, the man who unknowingly leaves a trail of disaster behind him.

According to Wikipedia here,

“Nielsen appeared in over one hundred films and 1,500 television programs over the span of his career, portraying over 220 characters.”

You know how marriages and affairs interest the Caricaturist. (She could’ve been a divorce lawyer, if she weren’t a caricaturist) So, she is dying to tell you that Nielsen was an extremely well-married man who had married four times. He tied his final love-knot when he was a youthful 74, and that marriage lasted until his death, ! I hope all singles who are 74 or younger are tuned in 🙂

As a final note to this post, I recommend that people who are afraid of the dark because they expect canine-baring, blood-sucking vampires to appear out of nowhere; should watch “Dracula – Dead and Loving it!” I promise that you’ll experience a transformation – your fear will be replaced by laughter!

4 comments on “Caricature/Cartoon – Leslie Nielsen as Count Dracula – The Vampire who couldn’t find his Bride!”

A few minutes ago this morning —- When I came to my desk to work, this little guy was there waiting to say hello...or was he a spy working for me in a parallel world, trying to steal my next story? I suppose it was the latter, or why would he disappear so quickly after being spotted?
Dividers in notebooks are great places to doodle :) #art #doodle #doodleart #sketching #sketches #roughsketch
It’s ok. #bleedingheart #bleedinghearts #flowers #flowerpainting #stoneheart #heartofstone #feelings #softhearted #heartart #digitalart #digitalpainting
Transparent thoughts are the sign of a pure heart.
Inspired by god knows who...
The years that separate us. I finished a MS meets call and found myself staring into my own eyes...and saw in them the years that separate us. Make of it what you will and feel what you will...your years are yours to feel and mine are mine. #poems #poetry #poetrycommunity #poetsofinstagram #writers #writerscommunity #writersofinstagram #writing #heartfelt #feelings #years #today #eyes #heart #thoughts #linespoetry
(This)functional family is now off my radar. Returning to writing tomorrow. #writer #writingcommunity #write #writersofig #artistsoninstagram #artistsofig #artists_insta #familylove #confusion #confusing #madnessoverloaded #cartoons #caricatures
(This)functional family keeps interrupting my work. I guess they want me to finish the drawing. #colorpencil #tonedpaper #cartoons #family #crazyfamily #nothingspecial #nonsense #goodnight
Feeling grateful. Coffee in bed. #coffee #coffeelover #coffeetime #coffeeaddict #cozy #cozyvibes #love #care #alone
Portrait of a Gadaba beauty. This is done in pen and ink. For my tribal portraits. I study the dresses, ornaments, and facial features and then make the drawing. The face in this portrait is my interpretation of beauty given the common features of the Gadaba tribe of India.
Winter gets into your bones.
The new year has officially begun. Bought this diary today :)