People who use prescription glasses shouldn’t watch movies in 3D.

I watched the fourth movie in the Pirates of the Caribbean series, “On Stranger Tides”…and I watched it in 2D!

But wait. Who’s watching ME? Is he the imposter or is he Captain Jack Sparrow? Must be Johnny Depp, the guy who has been impersonating Captain Sparrow – right? Anyway, here are the eyes of this entity.

If you think that I have lost my head completely, you haven’t watched the movie. Right at the beginning of the movie, our dear dirtily dandy Captain Jack Sparrow arrives in London. Why? Well, it’s because he’s looking for someone who’s been going around telling everyone that “he” is Captain Sparrow. A sparrow she is, as we later discover, and she’s known in Hollywood as Penelope Cruz.

Do I see you with your mouth so wide open that your jaw is about to come unhinged? Didn’t you know  – PoC-4 doesn’t star Keira Knightly the thin but ethereal beauty. Instead the bulb-nosed, long-faced, funny-accented Penelope Cruz has taken her place (thankfully they called her Angelica and not Elizabeth.) She fits into the movie almost as well as Keira would fit into an XXXL gown. She looks horribly, horribly, and horribly out of place. But never mind her – you could close your eyes whenever she gave that funny smile of hers and not miss a thing!

Don’t worry, you’ll not know a thing if you read on…so read on!

Well, as I said earlier Captain Sparrow finds that the funny woman, who we just described, was impersonating him. This obviously infuriates him, and he plans his revenge, which would include spiriting the funny woman across stranger tides to a deserted island and leave her there, after (note…AFTER) he told her that he loved her. (What other kind of revenge would you design if you looked and moved like Captain Jack Sparrow?)

So, there wasn’t the Flying Dutchman, the Black Pearl, or even Elizabeth. But yes, there were the mermaids, the Spanish, the black magic wielding Blackbeard, and King George II.

PS: There indeed was some black magic going on in the movie. When I left the hall, two eyes followed me out.
PS2: I’ve got to stop. The eyes are watching my every move!

PS3: Though it seems impossible, yet if you haven’t seen this caricature of Johnny Depp, you should click the following image 🙂 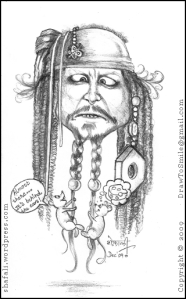 Where is the cheese...Captain Sparrow?

6 comments on “Rock and Roll on Stranger Tides with Captain Jack Sparrow!”