Presenting Joseph Stalin, the 5 feet 5 inches tall giant, who was born on December 18, 1878,  “ruled” the USSR for 12 long years, was lauded for his achievements, ridiculed for his foibles, and criticized for his harshness! 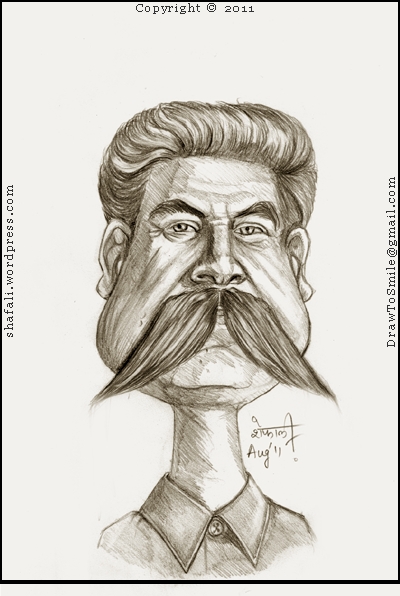 The mustaches? Oh, they help me hide my smirk.

Stalin was born in a cobbler’s family in 1878. His early life gave him scars that’d stay with him for life, permanently etching into his mind a severe inferiority complex. First, he contracted smallpox (other kids teased him by calling him “Pocky” – in Russian, of course), then he damaged his left hand in a couple of accidents. Though initially he was a good student he gradually moved away from studies ans got into politics. It was in 1903, that a 25-year-old Stalin formally became a Bolshevik.

was Losif Vissarionovich Dzhugashvili!
He called himself Stalin (or “made of steel”) – a good thing he did – or it would’ve been nearly impossible to remember his name.

Stalin shared a love-hate relationship with Lenin. Stalin had joined the Bolshevik forces headed by Vladimir Lenin, in 1903 when he was a young man. Over the next twenty years, as Stalin’s importance grew within the party, his differences with Lenin grew too. In 1922, Lenin suffered a stroke, and Stalin became the General Secretary in his stead, and also his personal advisory. However, their relationship worsened during this period as Lenin thought of Stalin as rude abuser of power. This of course, didn’t matter, as Lenin died two years later, and Stalin assumed complete authority.

Stalin’s Atheism and his Persecution of the Religious

During Stalin’s time, it had become dangerous for people to publicly proclaim that they were religious. Atheism was the in-thing, and priests, nuns etc. were killed in thousands. It wasn’t just the Christians who were persecuted but the followers of all other religions. Ironically, Stalin supported Islam elsewhere in the world.

But what is really ironical is something else. Believe it or not, Stalin was nominated for the Nobel Peace Prize in 1948 (for his work towards ending the second world war – however, the guy who nominated him forgot that Stalin had first entered a “peace pact” with Hitler and only when Hitler reneged on his promise did Stalin began supporting the allies.) Thank God he didn’t get it!

Stalin died in the October of 1953. His death was as much a subject of speculation as was his life. Some researchers believe that he was poisoned, others think that he died of an ailment caused by his being an incessant smoker. Whatever it was, his death generated a mix of extreme and opposing emotions.

Stalin’s regime is often described as brutal and tyrannical and the description holds true for the manner in which he treated his family.

It is said that Stalin is responsible for the industrialization of the USSR through the five-year plans. However, he achieved this by destroying free enterprise and establishing collectives. This plunged the USSR into poverty and misery and millions died of starvation.He is also thought to be the man responsible for improving the state of the Russian Intelligence.

Stalin is infamous for “purging” the Soviet Union of the enemies (people of foreign ethnicity – Germans, Poles, etc), people who had committed the flimsiest of errors that could be re-painted as an offence, and so on). Researchers tell us that 700,000 people were executed under his regime, and he himself has been said to have signed the killing orders for about 40,000 of them. This guy, note, this guy was nominated for a Nobel Prize!

7 comments on “Caricature/Cartoon of Joseph Stalin the Russian Marxist and the Totalitarian Tyrant who was Nominated for Nobel Prize!”

Painting in progress for my upcoming art show. The impressions we cast with our brush last longer than we do. #oilpainting #portraitpainting #portraits #art #artshows #delhiart #artgalleries #artmuseum #loveart #artlovers #impressionists
Surprise gift…the kind that makes me smile :) #smile #dreams
It’s good to receive a real, physical, tangible certificate in this digital age. This story is important to me because it was written at the end (hopefully) of a dark chapter in my life. It’s a story of hope and friendship in a dystopian world. I am honestly surprised that it turned out ok. @barbstrips @artieq_1 @amit.srivastava.art thank you. You guys were a beacon of light. #writing #dystopianfiction #writersofinstagram
Saw this heartwarming sculptural composition at the Visual Arts Gallery of India Habitat Centre Saturday evening. Forgot to post it earlier. Amazing talent. #indianartist #indianart #indianartists #visualarts #indiahabitatcentre #sculptures #artlovers #iloveart
Was at IHC last evening and loved most of the works displayed there. Here’s @goswami_shambhunath with his painting on Banaras. He’s also the one who curated the show. If you’ve not been there yet, I suggest that you visit. The show is on till May 31. #banaras #indiancontemporaryart #groupshow #visualart #indiahabitatcentre #art #artists
“I am all ears.” Back to my regular routine. Back to work. Would love to thank everyone who visited my art show and shared their feelings. Thank you. You were the life of the show. #art #ears #doglovers
It ends today. It was fun :) #art #artshow #indiahabitatcentre #delhievents #oilpainting
My solo show “Within” is currently on at the Open Palm Court Gallery, India Habitat Centre, Lodhi Road, New Delhi. It started yesterday and shall go on till 8 pm May 11th, 2022. It has twenty of my oil paintings on display.. If you are in Delhi during this time, do find time to visit. I’ll be at the venue and would love to receive you. #art #artexhibitions #artshows #delhievents #fineart #oilpainting #indiahabitatcentre #delhievent #paintings #artcollectors #artcollector #artlovers #indianart #indiancontemporaryart
Found this on the sidewalk. Can you tell what it is? What’s your guess? #puzzle #question #lostandfound #quiz #quizinstagram
A 6” sq swatch from the 4ftx5ft painting I am working on for my upcoming show. #oilpainting #art #artistsoninstagram #indianartist #faces #wrinkles #artshows #delhiexhibition #artexhibitions
A view of my Doodle Park where I make my park doodles :) #park #doodleart #doodles #doodlesofinstagram #goodmorning #sketching
The Joker’s Joker - his alter ego with whom he shares all his sordid plans. #joker #joaquinphoenix #psychology #psychopath #hollywood #moviestowatch #fear #madness #portraitdrawing #penandinkdrawing #penandink #artistsoninstagram #art #artwork #thinking #curious