You know something? We’ve found a solution to the problems of the world! 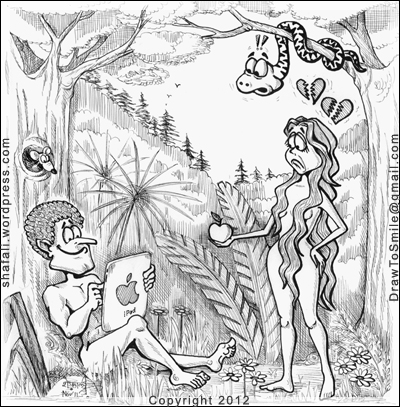 And I am not exaggerating…no Sir, I am not.

In my opinion, if every man on earth could be given an iPad, we should be able to tackle the population problem, which is the root of all our other problems! You get my drift?

(Women? They buy iPads for sure, but they’ve got their priorities mixed up – I mean why must I want to cook dinner and not play a game on my iPad? Go figure!)

Presenting the Caricature of Mahmoud Ahmadinejad as the Defiant President of Iran. In this image, he is seen challenging the world with Iran’s nuclear program (that he has supported all through these years as the one directed towards peaceful nuclear energy, but has recently begun to use for issuing threats of retaliation – especially to Israel,) with Russia and China as his friends. 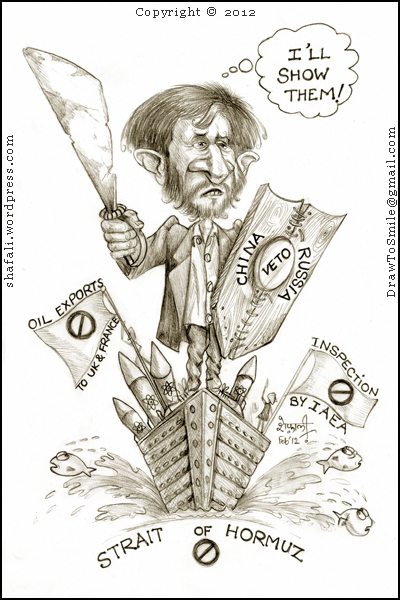 He was born in the family of a blacksmith, in the year 1956. He was a good student who became a civil engineer, worked as a Professor, and then became the Mayor of Tehran. However, this wasn’t the end of Ahmadinejad’s achievements.

Iran has a political system that’s quite different from the systems followed across the world. Iran has two leaders. The first and the more powerful leader is the Divine Leader (also called the supreme leader) Ayatollah Ali Khamenei, who isn’t elected, and who remains the supreme leader all his life. The Supreme leader controls the Military, the Media, and the Judiciary. On the other hand, the Democratic leader is elected by people and doesn’t have as many rights and powers as the Divine leader.  From 1997 to 2005, the democratic President of Iran was Mohamed Khatami, who had differences with Khameni, and Khameni wanted him replaced. This is how Ahmadinejad became the president.

Ahmadinejad always tries to be like the people that he represents, and perhaps this is why he got elected in the first place. He shuns luxury, and he even dresses up like a common man (note the missing tie).

Iran, Ahmadinejad, and the World – the Thought behind this caricature of Mahmoud Ahmadinejad

Iran has recently been making news by asserting its right to nuclear energy and nuclear weapons. US has imposed sanctions and has stopped importing oil from Iran, later EU followed suit. However, there are some countries that continue to support Iran. The most important of them are China and Russia (that also explains the shield in this caricature.) Ahmadinejad also made news by saying that if the sanctions were effected then the Strait of Hormuz that have the highest traffic of oil from the oil exporting countries, shall be blocked.

Sachin Tendulkar has made his 100th 100 in the Bangladesh vs. India in Dhaka! From his 99th, it took him 33 innings to arrive here – but arrive he did – and he became the first cricketer to score a ton of tons! This 100th century came through 51 Test Matches and 49 ODIs.

So, CONGRATULATIONS, SACHIN!  Thanks for making India and Indians proud 🙂 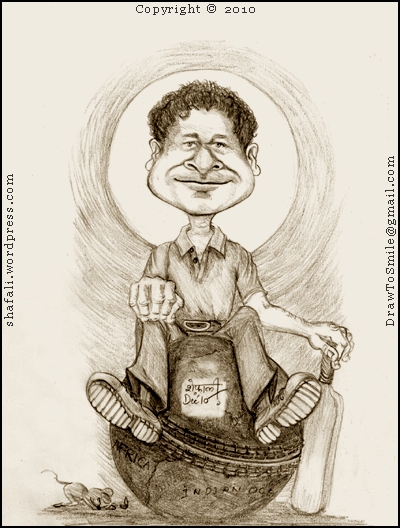 I know you don’t believe my luck. I mean how could someone as normal as this caricaturist end up fighting a mutant spider of the invisible type?! Such things happen only in movies – don’t they? Well…I feared your disapproval so I came prepared with some other options that might sound more normal to you.

You could select from:

So, which one did you pick as the most plausible explanation for my absence?

Anyway, the point is that I’ll shortly be back with more caricatures and…well more detailed caricatures…perhaps caricatures that have political stories to tell 🙂

Won’t make any promises as, so far, I haven’t been performing great on the promises front – not keeping too well – especially after that near-fatal battle with the oh-so-venomous spider – yet, watch this space for some cool new caricatures!

He looks at me with disapproval...all the time. Nothing I do can make him happy. And yet, and yet...
Will sketch, even while watching a movie. #sketch #sketching #pencilsketch #pencildrawings #staedler #staedlerpencils #lefties #artistsoninstagram #cantstop #drawings
This is my desk,
A portrait in oils. Finished, framed, delivered. And it made the family very happy. Size: 40”x30” oil on canvas. @amit.srivastava.art Thank you :) #portrait #portraitstream #portraits #oilpainting #portraitpainters #portraiture #indianartist #indianportraits #portraitartist #artwork #artofinstagram #artistsoninstagram #canvasart #oiloncanvas
“Can’t stay together, can’t stay apart.” The doodler attacks my toned paper. #art #artwork #artofinstagram #artistsoninstagram #trees #treeart #love #marriage #fights #life #argument #penandink #doodling #doodlingart #doodler #indianartist #indianart #indianartists #impossible
You know what this means... :)
Introducing my art site. The writer insisted that I have one...and you can see why. She’s all over it. Here’s the address. ShafaliRAnand.art #indianartists #artphilosophy #artistsoninstagram #art #oilpainting #oilpaintings #whatisart #artistoninstagram #artists #indiancontemporaryart
Happy Ganesh Chaturthi. Got a bit carried away this morning and a doodle became a slightly more serious sketch. Wishing everyone a great year ahead. #ganeshchaturthi #ganesha #ganesha #lordganesha #lordganesh #sketching #drawing #penandink #art #penandinkdrawing #artforsoul #artistsoninstagram #indianartists
The colors of life. Painted this from life. #photoshop #flowers #digitalpainting #colors #gray #lifequotes #lifequotestagram #happiness #paintingflowers #stilllife #stilllifedrawing
Poignant beauty. And with this I declare the end of my sketching spree. #mushrooms #deadwood #cycleoflife #beauty
Growing together...helping one-another, ignoring the shadows. See the close up for details. Tell me, do you see them? Men, women, forces, shadows? (Inspired by the tree trunk that you see on my screen.) #sketches #morningmotivation #morningwalks #seeing #together #family #community #shadows
Sometimes you see more than there is...sketches this yesterday. The tree that inspired this drawing can be seen on my screen. Gifted the drawing to the gentleman who sold me the pen. #sketching #sketch #doodling #trees #morningwalk #shapes #drawing #inspiration