Recently, I had begun to feel the need to draw the caricatures of a few women. The readers of my blog would know that I am slightly averse to drawing the caricatures of women, unless of course, an assignment requires me to draw them. My aversion to caricaturing women comes from the extra-dose of vanity that God injected women with. I’ve burnt my hand often by caricaturing women because a caricature seldom makes a woman look prettier than she is…and at the bottom of her heart, every woman wants her picture to make her look prettier – not funnier, not stupider, not more interesting…just prettier. Unfortunately, a caricature does everything but make you look prettier.

While I have caricatured a few women too (Nicole Kidman, Sarah Palin, Rihanna, Oprah, Kareena Kapoor, Queen Elizabeth II, Michelle Obama, Halle Berry…and a few others,) I’ve always tried to be more of a makeup artist than a caricaturist.

And then, I read about Christine Lagarde.

Christine Lagarde replaced Dominique Strauss-Kahn  as the Managing Director of IMF, when Strauss-Kahn had to leave stained by the hotel-maid rape controversy.

Believe it or not, She’s supposed to have the walls of her office covered with her own caricatures. This, I take as a confirmation that she’s fine with being caricatured, and while I don’t think that she’s escaped the clutches of vanity altogether (she wears pencil heels despite being 6 feet tall – that’s what women want – to look taller and better – even the most powerful women of the world,) I think she’ll take my caricaturing effort kindly.

Ladies and Gentlemen,
I present a simple  Pen-and-Ink caricature of Christine Lagarde, an inspiration to every woman who wants to stand tall and drive another nail into the coffin of gender inequality. 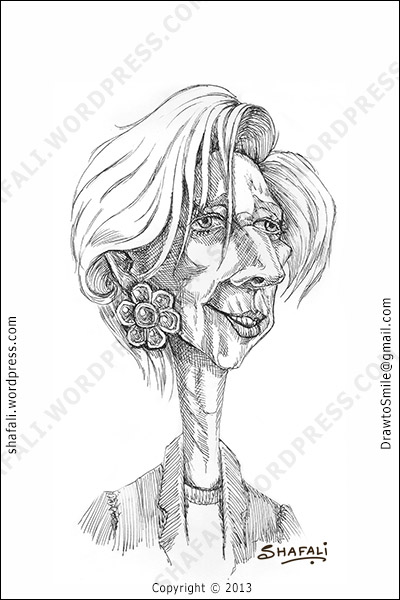 Here’s a quick synopsis of Lagarde’s Life and work.

Christine was born in the family of a French Professor, in 1956.

She studied to be a Labor and Anti-trust Lawyer. Later she became the first woman to lead Baker & McKenzie, a huge law-firm, which predominantly had male lawyers. She also was the French Minister of Finance and was ranked at the best among all Finance Ministers of the world by Financial Times. In 2011, she became the MD of IMF (International Monetary Fund.)

On the personal front, Lagarde has been divorced twice, has two sons, and is currently in a relationship. She loves gym-ming and swimming.

Christine Lagarde and Angela Merkel?
Merkel and Lagarde are a loggerheads on the EU Financial Crisis. In a nutshell, Merkel doesn’t want all the EU nations to get together to pay the debt that’s primarily due to the PIGS nations (as Germany being one of the fittest would have to pay the most). On the other hand, Lagarde believes that they should.

The Lagarde Payback Controversy
In a remark that people thought cut below the belt, Lagarde spoke of Greeks “who are trying to escape tax all the time.” Her remarks were interpreted to say that it was payback time for Greece and they generated a lot of negative publicity for her. Lagarde’s f/b page tried to alleviate the situation by saying that Lagarde was, “very sympathetic to the Greek people and the challenges that are facing.” However, this rubbed people the wrong way yet again.

Here are a couple of interesting links:

And now, an interesting Lagarde Quote on patronizing males 🙂

“The best defence when that happens is a very good and solid sense of humour. At the end of the day, they are human beings as well. They have wives, they have daughters,” According to her the best strategy would be to  “grit your teeth and smile“. (Source: This Telegraph Article here.)

8 comments on “Caricature/Cartoon – Christine Lagarde – The Managing Director of IMF in Pen and Ink.”