Another long day of sitting in the waiting area resulted in a stiff back, a head full of images that I’d rather not see again, and another caricature.

I don’t think I am an authority on religious stuff of any kind, and yet I’ve read tomes on Hindu Mythology and Indian History…and you can’t separate religious teachings from mythology…not from Hindu Mythology at least, which is intricately woven around our gods and goddesses. I mention this as in religion (and not just in Hindu religion, but other religions as well,) there’s an underlying concept of your being rewarded or punished by being sent to heaven or hell, as the case may be. I don’t know if other religions too share some sure-fire, quick-relief after-death remedies of ensuring that regardless of a person’s misdeeds, he or she may arrive in heaven, if certain procedures were followed.

Within the purview of my currently limited knowledge in this area, Buddhism is the only religion that confirms the finiteness of life in a body and speaks of your soul being the vessel that can be filled either with your reward (peace and happiness) or your punishment (pain, guilt, and humiliation,) all in your lifetime.

This caricature captures the fire of hell that burns within the soul of a sinner; fueled by guilt and humiliation, it starts in his mind, spreads through his entire existence, and then gradually eats through his sanity and darkens his visions with soot and smoke. 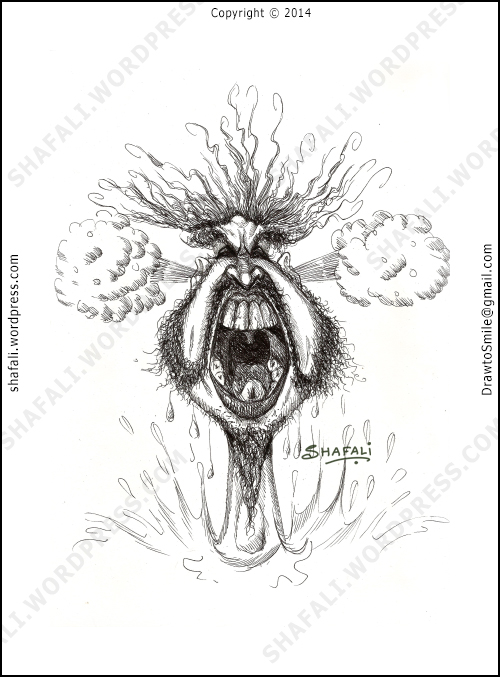 I am waiting for the wait to end…

There still are caricatures waiting to be drawn, hiding in the future…when they happen, I’ll bring them to you.

4 comments on “Caricature – Sinner: The Fire of Hell burns within the soul of a sinner and singes his insides!”