The cat’s out of the bag! Hillary Clinton announced her bid for President on Sunday. After a video-collage of Americans (of all ethnic  backgrounds and beliefs (couldn’t spot any Indian in the video though) showing them planning their futures, she said, “I am also getting ready for something. I am running for President.”

Watch the video and read some pro-Hillary commentary on the Guardian site, also check out the coverage by Fox News here.

While Hillary Clinton’s formal declaration on her candidature will be made tomorrow, almost everyone who knows anything about American politics already knows that she’s running for elections. Most of us have been privy to this open secret for years. Consider this caricature that I did in 2013. I didn’t pay a psychic medium, nor did I get a crystal ball to forecast this – I just knew that Hillary Clinton would run for the President in 2016. 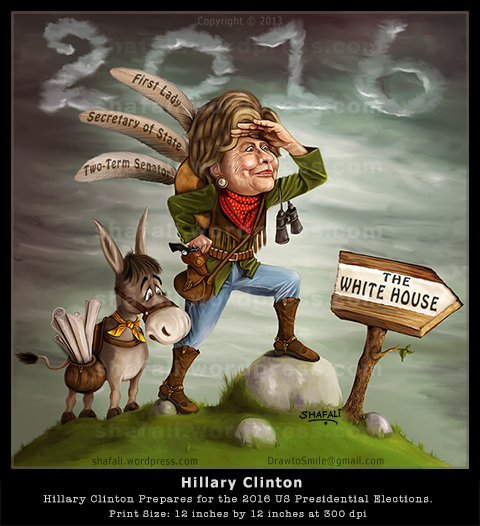 Hillary is ambitious, smart, and has been a politician all her life. Before you spring up one of those zillion emails floating around, and tell me that I am a fool to call her smart – I’d reiterate that she is indeed smart. You can’t survive in politics if you are a fool; and she has not just survived – she has thrived. If she wasn’t smart, she’d not have taken the opportunity to be the Secretary of State during President Obama‘s first term. If she wasn’t smart, she wouldn’t have forgiven President Clinton for his Oval-office misdemeanors. She is smart and she knows it.

You’ll also tell me that she doesn’t have a sense for fashion – I’d like to agree but add that this goes to prove that she’s a lot more sensible than the heel-tapping, fashion-conscious women who spend an hour each day, and so about 4% of their lives trying to please the onlookers. I think it’s idiotic…and I feel that nobody with a modicum of common sense would do it. Fashion doesn’t just make you waste time and money, it also makes you stress over stuff that’s done only to please others. Hillary doesn’t need that sort of approval – she’s a confident woman who knows that she has better things to do with her life.

Will she indeed be chosen by the Democrats as their candidate for the US Presidency?
It’s impossible to say. In the 2008, she had lost to a newcomer in Politics.  As always, the US Presidential Elections would be interesting to watch.

To sum it up…tomrrow Ms. Clinton will make a formal announcement begin her journey to the White House. Whether or not she will reach there and sleep in the bedroom she used to sleep in 14 years ago, is something that the American voter would decide.

One comment on “Hillary Clinton runs for President in 2016 – Caricature Art.”