Artists thrive on the emotions that swing from one extreme to another – and more often than not find themselves holding the short end of the stick. I can’t say for sure if that was the case with Morgan Freeman, when he got embroiled in the #Metoo controversy, but there’s a distinct possibility that he allowed the actor in him to get the better of him.

Honestly, I’m a fan of Morgan Freeman. I love his expressive face, his deep bass voice, and most of all, his ability to remain himself while becoming his character. I don’t know how he does it all.

Let me share the three drawings/paintings of Freeman I did.

Will he spot them? 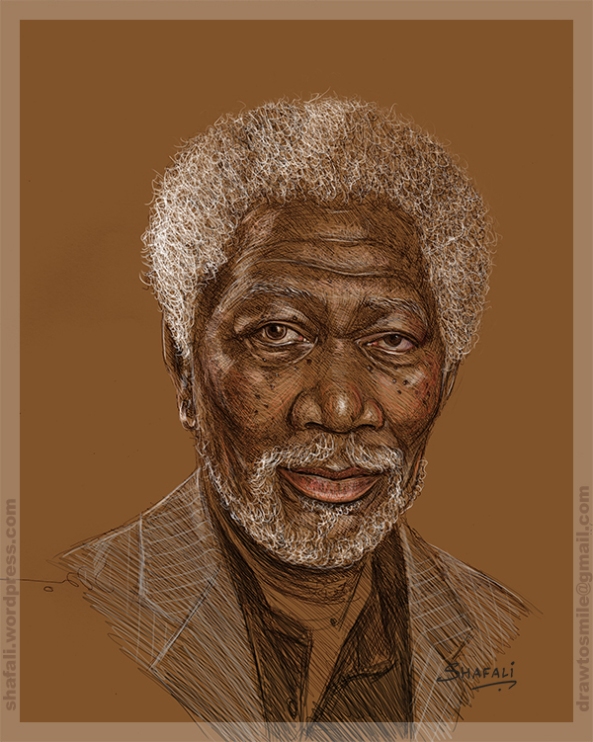 As you can see, the first drawing is a caricature that exaggerates his nose, which is his most characteristic feature, and it also plays with the deviations. (For a detailed study of how you can make caricatures, please check out “Evolution of a Caricaturist – How to Make Caricatures.”)

The second artwork is painted digitally and my focus was on capturing the lights and the shadows. My aim was to paint it within an hour, and so I began with laying blobs of digital paint to define the form and then just painted in the main features.

The third drawing was done more meticulously. First, I made a pen sketch. Then I scanned it and did the light color sketching in Photoshop.

For the philosophically inclined, I wrote a post yesterday 🙂 Morgan Freeman – In the Eye of the #MeToo storm.

I also want to thank everyone who responded to my previous post despite my inordinately long absence from the virtual world. You guys are swell. THANK YOU!