This caricature was inspired by Mr. Don Mills’ blog, “The Problem with Young People today is…” and more specifically by his post, “God Damned Teenagers and Their Pierced Noses Make Me Crazy!” 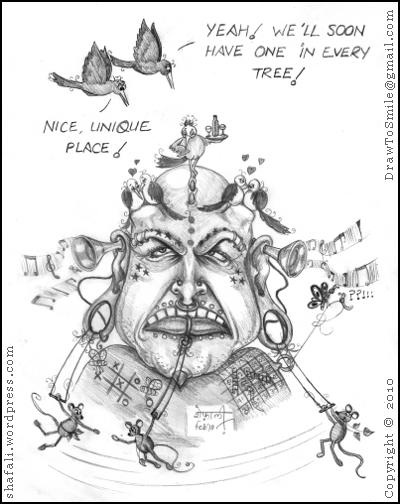 So, what all have you got pierced? Your ears? Your nose? Your upper lip? Your lower lip? Your tongue? Your eyebrows? Anything else of the unmentionable variety in the nether regions?

Primarily tribal in origin (lip piercing and stretching common in the African and American tribal culture/nose-piercing common among the Indian tribals/Septum piercing among the Aztecs, the Mayans…and so on and so forth,) Piercings and other kinds of body modification techniques are making a comeback…especially in the West.

The body piercing movement in the US gained ground in 1990s. According to Wikipedia, a survey in England too found that 10% of those above 16 had body piercings in places other than their ear lobes.

The most commonly cited reasons for piercings are: religious beliefs and self-expression. “I was born to look like everyone else – but I wanted to look different! Piercings, Tattoos, and even dermal implants make me unique!”

Fantastic! Unique, with a uniqueness quotient of 10%!

They are considered to be marks of status and religion. They are also thought to have magical properties. No Wonder about a third of the world population has had a tattoo of some kind.  Please take this information with a pinch of ink, because I’ve misplaced the source!

So here is an interesting fun fact about Piercings:

The Most Pierced Woman in the World is Elaine Davidson. As of Feb 2009, she had more than 6000 piercings, and lugs about 3 kilograms of jewelery, nicely distributed upon her person. She lives in Edinburgh, Scotland.  What we need to note is that in May 2000, she had 462 piercings, and this number ballooned to more than 6000 in the years that followed her discovery by the media.