German Chancellor Angela Merkel and the sparkling new French President Francois Hollande recently made big news by reaching an agreement that is expected to rejuvenate the economies of the region, especially those of Italy and Spain. Yet, whether the €120 billion growth pact will indeed bring about the momentum needed to pull the Euro-zone out of crisis, is a moot point. In fact, not many are willing to believe that this would work.

Here’s my take on the “monstrous” Euro-zone Crisis and the two leaders on whose shoulders rests the responsibility of reviving the Euro-zone’s finances. 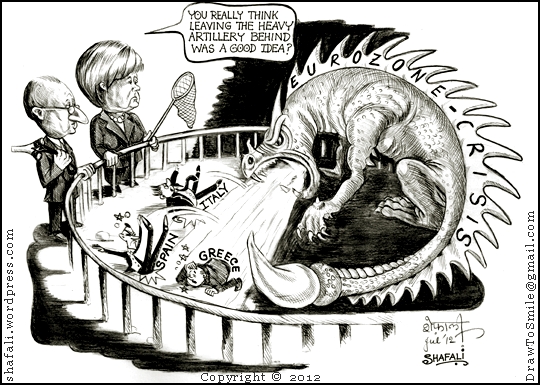 When Francois Hollande flew to Berlin, to meet Angela Merkel, the world watched it with a lot of interest. The reason was simple. The chemistry between Angela Merkel and Hollande’s predecessor Nicolas Sarkozy was fantastic. Perhaps it was because Sarkozy’s personality is Merkel’s opposite. Sarkozy’s quick wit and humor would make Merkel smile, and they appeared to enjoy each other’s company. However, when Sarkozy lost the Presidential crown to Mr. Hollande earlier this year, this happy political relationship came to an abrupt end.

Merkel’s first meeting with Hollande was dubbed drab by the media. Hollande and Merkel didn’t warm up to each other, the way people had hoped they would. So, when the time came for Merkel to visit Hollande in Paris, everyone was even more worried than before. When they met, however, they shared their thoughts and talked about Growth vs. Austerity.

The recently concluded Brussels Summit apparently brought some good news for the Euro-zone but after the initial euphoria has died down, we can now hear the experts say that the package is good, but not good enough.  What may be good enough for rest of the Europe, however, isn’t good enough for Merkel as Germans won’t be happy footing a bill that’s not theirs, and the unhappiness of Germans can jettison Merkel out of the Chancellor’s chair in the 2013 Bundestag elections.

If you are interested in a metaphorical story that explains the genesis of the Euro zone crisis, read “The Euro-Zone Crisis.“

If you are an artist who is not a political cartoonist, chances are that you’d welcome a primer on the Eurozone Crisis. Your loving, caring, and ever-so-considerate caricaturist has cobbled up a story to help you understand the essence of this euro-excitement that refuses to settle down.

Read the other two parts of this story at the following links:

Presenting Nicolas Sarkozy as the temporary Caesar of Europe (or more accurately of the European Union). It was a dream of many great leaders including Charles de Gaulle, Napoleon Bonaparte – and most of all Caesar. They all wanted to unite the entire Europe. Almost all his life Caesar waged war against other countries and once, even against Rome, to achieve his purpose.

For President Sarkozy, this honor came almost automatically, when the German Chancellor Angela Merkel refused to budge from her stance of not making any concessions for those Euro zone countries who had allowed themselves to sink. Unfortunately everything including the fate of the Euro still remains shaky, and the Union still has huge cracks in it, which may allow any of every deal to fall through it. Alas!

What are you looking for?

Oh. You are looking for the Shortest Bio of Nicolas Sarkozy and Caesar on the Web – right?
(Don’t read this – here I berate myself for becoming so predictable…you are still reading…I can see you reading. Okay, as you aren’t stopping, I’ll have to take my fight with myself elsewhere.)

But here are their biographies and also their caricatures…before I decided to roll them into one.

Read the other two parts of this story at the following links:

I have bowed to your wishes and updated the Caricature Gallery. For a quick reference for those who’ve missed my more recent additions to this blog. Here are five of the twelve News-makers who got into the Gallery today.

The lady who’s got everything that matters. The former Alaskan Governor who could turn the US into a tax-free nation, if you’d vote for her and make her the first woman President of the US – provided she decides to stand for the 2012 Elections!

You may have forgotten this chap but he hogged the International Terror News for a whole decade, until he was removed from this world along with his stash of pornography. Does that ring a bell? Here’s this caricature of OBL, which I drew while watching the news on CNN. Why six dozen presumably virtuous virgins would want him is totally beyond me.

His supporters would kindly excuse me for misspelling his name (if I did) but this guy holds the Guinness World Book record for the most variably spelled-name. Gaddafi’s caricature is one of my favorites. It shall remain contextual until Gaddafi either decides (or is made to decide,) to let go of Libya. If I were you, I’d click the following icon to check out his costume. If you are a normal non-antiperspirant-user kind of person – one look at his costume could drown you in your own sweat!

He is the colorful President of France, known more for his wife Carla Bruni than for his work (or so I presume, because I see more of his wife’s pictures than I see his.) I should also add that now that they are expecting their first child, Sarkozy’s smile and Carla’s baby-bump are both expanding exponentially.

This unassuming gentleman is responsible for a shortage of sleeping pills in New Delhi. The politicians have been popping them by the dozen, as Anna Hazare makes them dance to a Gandhian Remix. Whether or not he’d prevail is yet to be seen. In my humble opinion, why would an innocent young man want to ever become a politician if the carrot of corruption is made to disappear from the system?