The question of Cleopatra‘s beauty remains unanswered. However, after innumerable studies, some die-hard Cleopatra scholars have decided that she wasn’t dreadful to look at, nor was she as beautiful as Elizabeth Taylor’s rendition of her character makes her to be.

So here’s what she’d think, if she were looking down a 2000 year time-tunnel…watching those posters:) 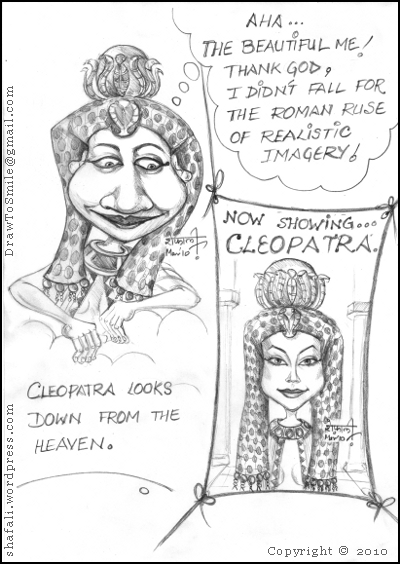 Was she Beautiful or Smart?

The Story of Queen Cleopatra – the Last Pharaoh of Egypt!

Cleopatra was born in 69 BC. She co-ruled Egypt first with her father, then with her brothers, one of which she also married (Pull in those huge eyeballs. Brothers and Sisters often married in the Ancient Egypt. This “intermarriage” and “inter-breeding” supposedly helped them keep their bloodline pure!) So in those times, this marriage wasn’t incest at all.

Here’s some bit of history in our simple modern language. Cleopatra wasn’t an ordinary woman. Beautiful or not, she was definitely full of gumption. When she was 14, Cleopatra helped her father Ptolemy XII in his work. (Yes, those ancients probably didn’t have enough unique names and so we need to deal with those numbers. Our Cleopatra of dubious beauty too was the VII of the many Cleopatras who bob up and down the Egyptian historical waters.)

When Cleopatra turned 18, Ptolemy XII signed himself out of this world, and Cleo had to marry her young, 12-year-old brother, Ptolemy XIII (yes, the unlucky number thirteen!) Within a few months, there was trouble between the young couple (the causes are unknown and unrecorded, yet it isn’t difficult to imagine a young, mature-beyond-her-years Cleopatra struggling to keep calm while her husband threw his rice on the table and yabba-dabba-dooed his way through dinner.)

So Cleo decided to leave him. While she waited for good things to happen, something (like a severed head of Caesar’s General) brought an angry, smoke-belching Caesar to Alexandria. Cleopatra smartly assessed the situation, wrapped herself in a Persian Carpet, and presented herself to her enemy’s enemy, as gift. One thing led to another…and the two rolled into an item. Among other things, Caesar gave Cleopatra, Caesarion – but refused to name him his heir in Rome, choosing his grand-nephew Octavian instead. At the time of Caesarion’s birth, Cleopatra was just 22.

Cleopatra Tries to Make a Home – with Mark Antony!

To make a long story short, after Caesar’s death, Cleopatra came back to Egypt, and with her brother and husband dead, she became the Pharaoh when she was 25. Later, she had a politically motivated relationship with Mark Antony, who was married to Octavian’s sister, Octavia (Notice the lack of creativity in the way even the Romans named their kids. Tchah!) Then there was this war between Antony and Octavian, and in 30 BC when Antony’s armies deserted him, a 39-year-old Cleopatra committed suicide through the traditional route of being bitten by a poisonous snake.

Here are some links that you’ll find helpful: