Everyone knows that Hillary Clinton will be running for President in the 2016 Elections. Period.

Here’s my take on the story. 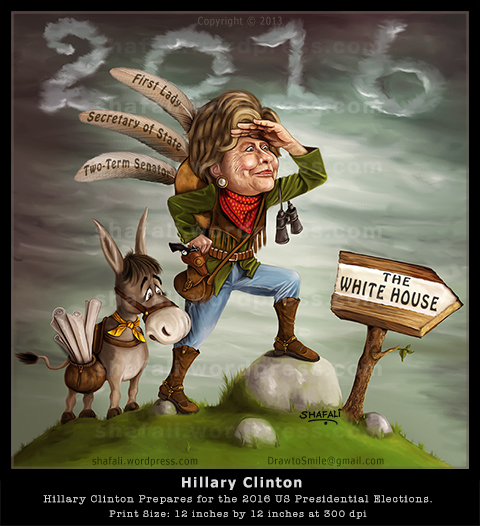 Will Hillary run for the 2016 Presidential Elections?

Here are my reasons for believing that she will.
If the reasons given by me don’t convince you, read 5 Signs that Hillary will run for President here.

…has often been criticized. I’ll forever continue to wonder why it is so easy for men to get away with the same outfit (note that the only thing that ever changes in President Obama’s clothes is the color) while women fret over what they have to wear. I have nothing against Hillary dressing up in oddly constructed pant-suits and even in the outfit that you see in her caricature. I think that she still dresses up a lot better than Michelle Obama.
This deserves a closeup view of her outfit in this caricature.

However, if you like women to look like made-up dolls and have the time and energy to read about Clinton’s fashion faux-pas, click here… or search for “Hillary Clinton’s Fashion Faux Pas”.

(This bit should be of interest to the artists.)

I had been planning on doing Hillary’s caricature for a very long time, but it wasn’t until last week that I really attached myself to my seat and decided to plunge into this caricaturing exercise. This is a digitally painted illustration done for the purpose of print (it measures 12 inches x 12 inches at 300 dpi.) I first did a rough sketch (a sort of doodle), then made a final sketch, scanned it, and then painted it in Photoshop CS6.

I approached this illustration more as an artwork than just a caricature. The somewhat bewildered donkey representing the democrats, at the left; the happy and alert Hillary checking her progress, in the middle; and the wooden signboard at the right – all on top of a hill, with cloudy skies behind – a composition that comes together nicely. The colors balance one another out (check the warmer hues canceling out the cooler ones) except in one place – in Hillary’s outfit, where I used never-wear-together colors, clothes, and accessories. The pearls and the formal jacket (in…GREEN?) create a jarring effect when coupled with her BLUE Jeans and high-ankle leather cowboy boots. It exaggerates her oft-criticized fashion sense, and strengthens the caricature.

Now let us ponder upon a more important question, one that can be answered only by Samantha the Witch.

Will Hillary Clinton become the next President of the United States?

I think the US has tried a “first” by electing a non-white President for the first time in its history and given him two terms to prove that a first works. Whether or not Hillary Clinton will become the first woman President of the US will depend on whether people really gained from their first-first. While I am sure that Hillary has a strong resume, I don’t think people care about resumes. I guess people would want a change – and that could help the Republican candidate (Though I don’t know if there’s any Republican with an image as strong as Hillary’s.)
This is precisely why Hillary is aiming to reach the White House, once again; except that if she succeeds, she’ll not be there as the First Lady (one of the many feathers in her hat,) but as the President of the US. I wonder what Bill Clinton will be called then. The First Gentleman of America? I guess the geniuses of the White House will put their heads together and come up with an answer when such a situation arises.
Wondering…Why Hillary?

Hillary Clinton has many feathers in her cap (and you can see three of those in her caricature above.) She’s been the First Lady of the US, a two-term US Senator, and the US Secretary of State; but there’s more. She’s got a Law Degree from Yale Law School where she met her husband Bill Clinton who she married in 1975. She’s held high-paying jobs all her life and there were times when she earned more than Bill Clinton.
And finally,