Did you know that David Cameron had worried himself sick (got ulcers) on the issue of the Scottish Referendum. When he heard the result and realized (realised) that Scotland had voted for “no divorce” for a moment he couldn’t believe his ears. In fact, the Queen was so happy that she purred (as told to the media by David Cameron.) 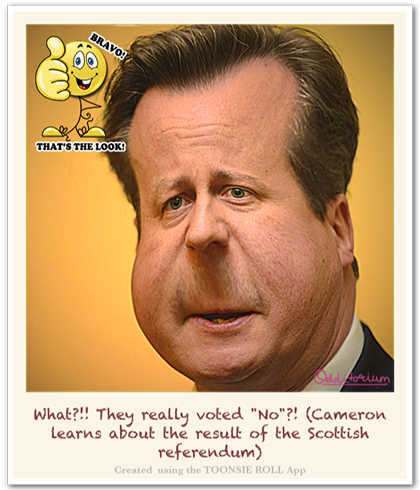 If you want me to email you when Toonsie Roll goes live on the App Store, please visit the Toonsie Roll page by clicking the button in the menu above, or the link below.

The look of slight confusion (the eyebrows raised in the middle, the partially open mouth) and yet relief creeping up at the corners of his lips – it actually fits the situation perfectly. As an artist, I’d have spent hours trying to get that look right – but I used Toonsie Roll and got the whole caricature along with the emoji, the text, the signature, and of course, the caricature – in four minutes flat. Isn’t that cool? All on the basis of intuition. The point is – it’s tons of fun to caricature people you know – for instance, your boy/girl-friend, your boss (oh yes,) or even your friends – and all you need to create a caricature master-piece is this app in your device 🙂 Send me a message through the contact form, and I’ll let you know when it hits the App Store!

Anyway, coming back to Cameron’s delight upon the positive (er..negative) vote – the percentage that voted for divorce (45%) and that voted for staying married (55%) doesn’t show a very wide gap, which means there still is a sizable population that wants to separate – so his worries might not be over yet. Amidst allegations of vote-rigging, the Scottish referendum of 2014 is already stirring up emotions instead of settling them down.

Recently I had the opportunity to illustrate a medieval jousting match between Mike Ross and Asa Hutchinson in Present Day Arkansas. As you can see this is a fairly detailed scene that has three important points of interests. 1. Knight Ross on his horse, 2. Knight Hutchinson on his horse, and 3. The Capitol Hill Building in the background. However, it was the crowd in the background (yep, I know, you never noticed it,) that made me lose my sleep. I had once read Tom Richmond’s article on painting crowds, and I had since been wondering if I too would ever be asked to paint a crowd. Friends, with this artwork, I can now proudly claim to have worked on a crowd scene.

Here’s the artwork that I did for Talk Business & Politics, Arkansas:

The experience of illustrating this scene oscillated between being challenging and entertaining. When the Art Director first explained the idea to me…honestly, it sounded slightly intimidating. The gubernatorial candidates in armor riding their horses, carrying lances, charging at each other, with a crowd watching the joust, and the Capitol Hill Building in the background. Sure! No Problem. Except that there was no reference images of these two guys looking angry/charged up…anywhere on the web. Always with honey on their lips, always with a twinkle in their eyes – they are the sweetest two guys you can find anywhere on the planet! Next, their jousting gear! Guess what – Knights wear helmets that cover their faces. Here the whole idea was to create the caricatures of Ross and Hutchinson – and if I had stayed true to the actual helmets that knights wore, then short of labeling them, I’d have to no way to tell who was who.

But then, I had my own knight in the shining armor, known elsewhere as the Art Director, who did a quick composition of the scene and sent it across. That was super-sweet of him and the composition really charged me up. I am rather good at putting expressions on people’s faces…so I got down to work and sent the facial sketches over to the client…and of course, some little ideas of mine (the helmets, the feathers, the laughing horses, and those banners that are being held up by the crowd.) I also did a full-sketch, which got approved and I was set to go.

When I started painting, considerations of light and the amount of details cropped up. I also had to decide about the right amount of shine on the armor. (If you stood in the crowd, you’d be pulling out your RayBans.) I played around with the idea of giving them an armor that didn’t shine so much (more like the fantasy art thing I used to do many years ago) but then I thought that for this battle, they’d sit up the whole night burnishing it…won’t they?

I also took these passport-sized closeups of the two knights – just in case some of you are interested in a closer view. 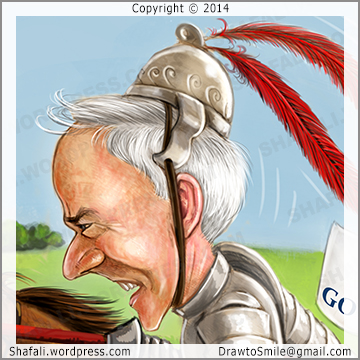 I wish the these two gentlemen the very best for November 4th, 2014.

How to Draw Caricatures?

On a different note, I’ve been receiving queries from artists and art-students on how to draw caricatures. Some of you have inquired if I conduct any online/on-ground classes for caricature art. My answer, while not totally affirmative, could result in a more inexpensive and quite effective learning possibility for you.

In the beginning of this year, I had written a book that could actually help you create excellent caricatures. The book assumes that you like drawing and now want to learn the fine art of caricaturing faces.

Check it out on Amazon.

I hope it helps 🙂

Important Note for Hobbyists who wants to create terrific caricatures without drawing:

In a few days, I’ll be announcing an iOS app that I’ve helped develop, and which when used to apply the principles given in the book can help hobbyists create very interesting caricatures.

If you have an iPhone or an iPad and are interested in hearing about it, use the contact form and send me a message with the subject “Tell me about the Caricaturing App,” and I will send you a message when the app goes live for downloading.