Mr. Keith Richards (the guitar-strumming, auto-biography writing rock-star, who has inspired many caricaturists to push their wrinkle-painting abilities beyond safe-limits,) hypnotized this caricaturist and ensured that his was the first caricature I made. I just fell for his deep and mysterious wrinkles, his beautiful red bandana, his long silky tresses, his skull-ring, and… that cigarette swinging from his lips.I couldn’t have painted anyone else until I had painted him. His awesomeness consumed me…totally and completely.

(Statutory Warning: Cigarette-smoking is injurious to health. Viewing images of people smoking cigarettes could result in tertiary-smoking.  It’s recommended that you visualize a daisy hanging from Mr. Richards’ lips while viewing the following caricature.)

OK. So, here’s his caricature. This will tell you why I flipped. 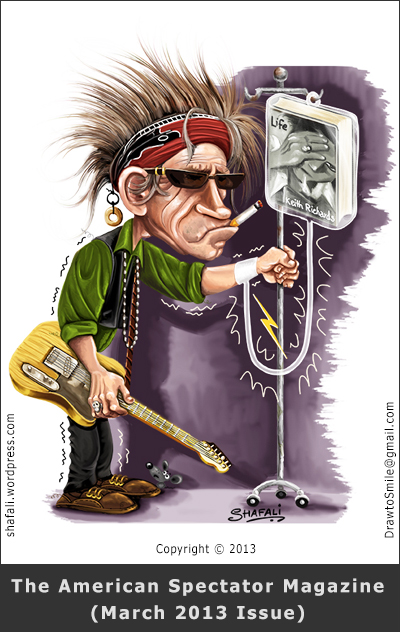 He’s considered to be one of the best (4th to be precise, according to this Wikipedia page on him,) guitarists of the world.  He is one of the founding members of the rock band The Rolling Stones (same band to which Mick Jagger belongs. Their lines look similar, don’t they?) Richards found his way into this article “Rock and Roll is (Mostly) Noise Pollution”  because he too wrote his Autobiography “Life“. (If you are wondering…the title of the article spoofs “Rock and Roll ain’t Noise Pollution” by AC/DC.)

What I loved Drawing?

Actually…everything! More specifically, his hair, his bandana, his face, his guitar, his cigarette…and my little mouse-friend. Did you notice him?

About the Colors?
When you paint rock-stars, you don’t have to worry a lot about colors 🙂 They supply the colors themselves.

If you’ve known this caricaturist for a while, you know that when left to her own devices, she picks up a pencil and draws black-and-white caricatures. She then expects people to swoon over her black and white drawings, conveniently forgetting that the world loves colors. (She obviously won’t let go of this opportunity to compare herself with the Great Mr. Henry Ford who was happy making black cars, telling people that they could have any color as long as it was black.)

So when on February 5th, she opened her mailbox to find an email from the American Spectator, asking her to paint the color-caricatures of  three famous rock stars of the twentieth century, she looked at the deadline and moaned. Three color caricatures in five-and-a-half days…and of rock-stars (I am tone-deaf, remember?)

The good news is – I did it 🙂 The short and succinct “looks great!” from the other side of the world, kept me fueled up.

Here’s Mr. Peter Criss a.k.a. the Catman. He was the drummer of the Rock band KISS. The caricature accompanies an article “Rock and Roll is (Mostly) Noise Pollution“.

The concept asked for Peter Criss (in his Catman costume) checking out the thesaurus, as the article is an interesting review of the mad-rush of rock-star autobiographies.

The text “Makeup? or… Breakup?” twists the title of his autobiography “Makeup to Breakup,” to build a connection with his checking out the thesaurus. I left the sticks on the ground – unattended…for now, because the autobiography takes up his attention.

What I loved painting the most?

That white face and those gloved hands…getting those highlights right was fun…and of course, it was a novel experience. You don’t paint a Catman every day.

Guess that’s all for now 🙂

(Note: I know that many of my visitors arrive here to read my verbal-caricatures. If I’ve disappointed you, I am sorry – but I’d recommend that you pick up a copy of The American Spectator and read “Rock and Roll is (Mostly) Noise Pollution.” I don’t have the nerve to write anything after reading that :))

Dividers in notebooks are great places to doodle :) #art #doodle #doodleart #sketching #sketches #roughsketch
It’s ok. #bleedingheart #bleedinghearts #flowers #flowerpainting #stoneheart #heartofstone #feelings #softhearted #heartart #digitalart #digitalpainting
Transparent thoughts are the sign of a pure heart.
Inspired by god knows who...
The years that separate us. I finished a MS meets call and found myself staring into my own eyes...and saw in them the years that separate us. Make of it what you will and feel what you will...your years are yours to feel and mine are mine. #poems #poetry #poetrycommunity #poetsofinstagram #writers #writerscommunity #writersofinstagram #writing #heartfelt #feelings #years #today #eyes #heart #thoughts #linespoetry
(This)functional family is now off my radar. Returning to writing tomorrow. #writer #writingcommunity #write #writersofig #artistsoninstagram #artistsofig #artists_insta #familylove #confusion #confusing #madnessoverloaded #cartoons #caricatures
(This)functional family keeps interrupting my work. I guess they want me to finish the drawing. #colorpencil #tonedpaper #cartoons #family #crazyfamily #nothingspecial #nonsense #goodnight
Feeling grateful. Coffee in bed. #coffee #coffeelover #coffeetime #coffeeaddict #cozy #cozyvibes #love #care #alone
Portrait of a Gadaba beauty. This is done in pen and ink. For my tribal portraits. I study the dresses, ornaments, and facial features and then make the drawing. The face in this portrait is my interpretation of beauty given the common features of the Gadaba tribe of India.
Winter gets into your bones.
The new year has officially begun. Bought this diary today :)
Taking a blow,