(for the regular readers, others please skip.)

For the last two months, I’ve been working on something very different and something really detailed…something that has kept me away from creating caricatures for this blog (ok…I did Merkel’s caricature, but other than hers, all the other caricatures that I’ve been doing are for that other project…and oh, that project really has nothing to do with caricatures.) Confused? You should’ve heeded my warning.

Now let me tell you about my recent work for The American Spectator magazine. I painted the cover page of the October issue of the magazine, which features three of the most admired Presidents of the United States. The forever young and handsome John F. Kennedy, the White House Cowboy Ronald Reagan, and the silent but strong Calvin Coolidge.

My copies arrived two days ago, and just before I finished work last night, I took this picture of it.

The Story of the Cover’s Creation

When I learned that The American Spectator would like to me to paint the three Presidents together, I felt really happy. I love to paint caricatures with stories, and painting three well-known faces in the same picture along with a story that made them look like they were friends-forever, was something that made me want to drop everything else and work on it.

I sent in the sketch. While everything else in the sketch remained the same as what you see here, I had an open window behind President Reagan and you could see the earth through it. My idea was that these guys could get together only in heaven – and this would add to the effect. This of course, didn’t make to the final painting – nor did Reagan’s hat on a peg – because that would have me add a wall behind them, and a wall would make their environment appear claustrophobic. I am sure that even in heaven, the American Presidents would be given beautiful, spacious quarters… so I decided to add those French Windows looking out into a haze of clouds.

Painting the Caricatures of the Three Presidents

I had drawn President Kennedy‘s face before, so I knew his face well. What I didn’t know was the exact color of his hair. I checked out a lot of pictures of his, and his hair looked different in every one of them. It varied from black, to dark brown, to light brown, to reddish-brown, to golden.  I still don’t know. But he looks like himself and that’s good enough for me 🙂

(President Kennedy’s Black and White Caricature done a couple of years ago.)

President Reagan’s face is tough to caricature. If a caricature-artist wants to challenge himself  (or herself – excuse the stereotyping, but truth be told, most of our kind are men,) he should try caricaturing Reagan’s face. I had to do a lot of research to figure out what he liked to wear as casuals. (In fact, I came across a picture in which he was wearing checks in a meeting with Margaret Thatcher.) I realized that he loved horses and I thought that his cowboy getup in denims would be just right for the occasion. He could’ve returned from a pegasus-ride, or could be going for one. (Fellow Artists, note that according to the light outside of the windows, it could be late morning or early afternoon)

President Calvin Coolidge was a visual enigma. I had sketched him on the right side of the page, which meant that I should show his left profile. After hours of research, I came to the conclusion that because President Coolidge had little hair on the left side of his head, he always got his portraits painted/photographs taken to show the right side of his head.  I had absolutely no idea what his left profile looked like, until I came upon a 1924 video of one of his public addresses (after he had fixed the Great Depression?) and in that video he twice turned to show his left profile to the camera. I know that he must’ve berated himself for it later, but what was done was done – and a happy caricaturist returned to her drawing board – knowing exactly what to paint.

…that their topic of discussion is this specific article about JFK actually being a conservative (and this is why JFK’s got the magazine in his hand,) was super awesome – it came from the super-creative Managing Editor of the magazine! It just made the picture-puzzle fit. Speaking of picture-puzzles, I am reminded of the project…I need to go back to work.

Meanwhile, here’s the image closer up.

do you want to know how “really” Newton happened to discover gravity? I have the inside scoop…return if you are interested 🙂

I was earlier planning to post a caricature of Julia Gillard along with my story of why she resigned from her position as the Australian Prime-Minister, but when I received my copies of the American Spectator Magazine’s July-August issue, I couldn’t resist from sharing these pictures here.

Let me start by showing you the magazine.

The American Spectator – July-August Issue 2013 on my Desk. (Click to enlarge.)

The Story of the Cover’s Creation

When I heard from the magazine that they’d like me to do the cover for the July/Aug issue for them, I felt thrilled yet a bit anxious. A cover is, well, a COVER. I could live with having forgotten to paint those draw-strings on Red’s pajamas, but when an image is destined to become the cover of a magazine, it asks for a lot more dedication from the artist.

The requirement was – an American family of 1940s/50s, gathered around the radio. Sounds simple, right? Let us analyze.

An American family? That was easy. I am so completely into Hollywood movies, American News (CBS News is on my top-bar,) and American sitcoms that I often think of myself as a virtual American.

But an American family of 1940s/50s? I wasn’t even born in the 40s and 50s. In fact, my mom must have been a little girl back then. So, I had to research. I had to research the radio, the dresses, the toys, the papered walls, the floral couches, the pooch (who would’ve been a cocker-spaniel if my friend Nancy wouldn’t have told me that the middle-class family in those days would likely own a mutt and not a spainel,) and the colors that would make it look more like the 1940s.

So, upon receiving the requirement, I did my research, got it all into a sketch, and sent it over for approval. After they okayed it I began painting…and I did little more than paint for the next many many many hours. Eventually, a very tired, zombie-like me sent the artwork to the Magazine , plopped down on the bed and got ported to Atlantis. The next morning, I heard from them that they were happy with it. I took a small break from work and then returned to work on a Graphic-design project.

Then two days ago, I received the copies of the magazine. The cover looked even better than I thought it would. The Design team had done such a great job on it. The subtle, low-intensity colors in the Title, the subtitle, and the top and bottom bars integrate with the picture seamlessly. I was so happy when I looked at it that I decided to photograph it and post it along with the artwork.

Here’s the image closer up. 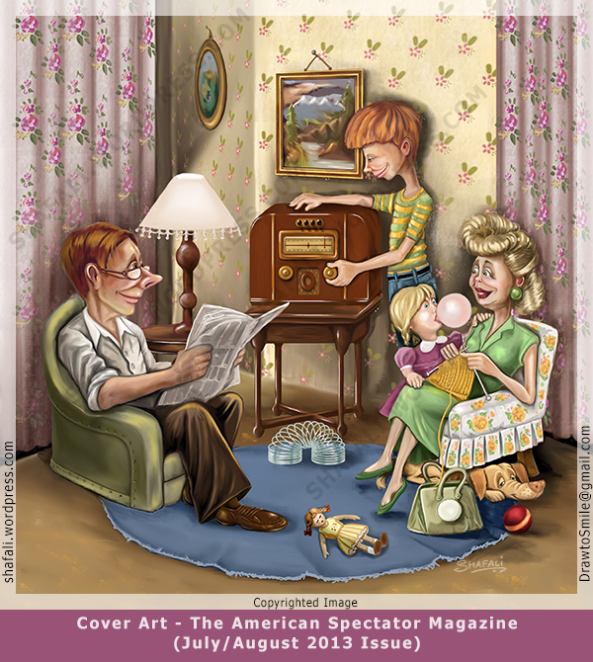 I’ll return with Ms. Gillard’s story soon 🙂 Until then keep drawing to smile.

Cuteness overload on the streets of Noida :) #dogs #streetdogs #streetdogsofindia #cutepuppy #normal #sunnyday
Me in front of my painting “Shield” with “own your Energy” by @nonawalia She visited my art show at @lalitkalakademi today and signed my copy of her new book. My meeting with her underscored my feeling that she is the only one who should’ve written this book about staying charged up in a drained world. Loved it Nona! And thanks for visiting. Discussing my paintings with you is always such a fulfilling experience. #artshow #ownyourenergy #inspirationalbooks #books #oilpaintings
If you are in Delhi from 22nd to 28th November, do visit. I’ll be delighted to receive you at my Art Show “Revelations” at Gallery no. 5 at Lalit Kala Akademi, Delhi.
Fiddling with Canva and calling myself busy…#squirrels #canva #squirrel #busy #getalife #nature #animalmemes #talkingheads #timepass #pastime
Bought it years ago…started reading it today when my schedule is packed so tight, it barely leaves me time to breathe. But it’s a good thing I did, because it will help me keep my mind clear of inconsequential details by spreading through the stress-inducing microscopic gaps. Next show begins on the 22nd and still there’s so much left to do…stressing out certainly doesn’t help. What are you reading these days? #reading #kenfollett #kenfollettbooks #elizabethtudor #historicalfashion #busy #artexhibition @lalitkalakademi #timemanagement
@lalitkalakademi today. Artist M. Raja of Chennai with his mixed media works. He is in Gallery 5. I loved his delicate treatment of the form and the subtle variations in the colors and shades. #indiancontemporaryart #indianartist #mixedmediaart #chennaiartist #beautifulart
Right now at India habitat centre. Witnessing some absolutely delightful watercolours by @arun73232020. On till Monday evening…don’t miss. #delhiartist #artistsoninstagram #indianart #watercolor #watercolorpainting #watercolorpainting
Work in progress in my little corner…an atelier painter is what I am…at least until I reclaim my plein air existence. #oilpainting #art #artspace #mycorner #mylittlecorner #artlover
Final picture from the show...this is shot outside. If you've been to @alliancefrancaise in Delhi, you'll recognize the place. On a break now :)
At my art show Turbulence @alliancefrdelhi It’s on till tomorrow evening :) #art#oilpainting #delhi #delhievents #artshows #artexhibition #artexhibitions #lodhiartdistrict #artlovers
Today, at 4 pm, I will be talking about the contribution of these four great French artists and their contribution to the field of art. Venue: Galerie Romain Rolland, Alliance Francaise de Delhi.
TURBULENCE at Alliance Francaise de Delhi 16th To 19th September, 2022, will present my oil paintings and I will also be paying a portrait tribute to the French Masters #claudemonet #edgardegas #henrimatisse and #paulcezanne through their oil portraits @alliancefrdelhi #delhievents #artexhibition #artshow #delhi