Can you trace Einstein’s thoughts?
My take?!
“Why did I get the Nobel for the discovery of Photoelectric effect and not for the Theory of Relativity?” 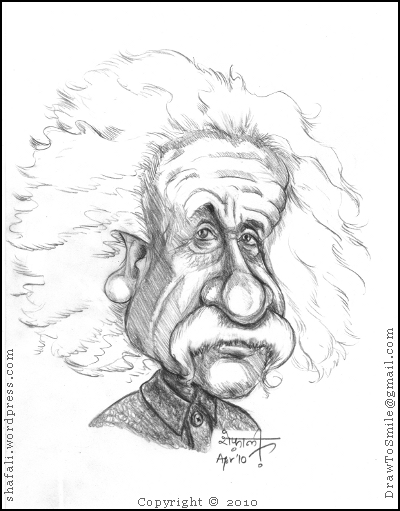 Albert Einstein is probably the most caricatured scientist. His appearance has helped artists create the stereotype of the absent-minded genius yet somewhat crazy scientist of our science-fiction stories and movies.

Einstein was born on March 14, 1879 in Ulm, in the German Empire. His father was an engineer and a salesman, who started his own electrical goods company in 1880. This company manufactured equipment that used direct current, and it went out of business 14 years later, when alternating current became the order of the day. Einstein was born in an affluent family (check out his childhood pictures – photographs don’t lie,) and so he received home-tutoring from Max Talmud, who ate with the Einsteins every Thursday, and in exchange (apparently,) he tutored Einstein in Science, Math, and Philosophy.

In his early years, Einstein had speech difficulties (really?), but otherwise he was a bright student, and so he obviously was also a rebel. Though Einstein lived and worked in Berlin for a long time, in 1933, the persecution of Jews led to Einstein moving out of Berlin and emigrating to the US. (This tells us that Einstein wasn’t just an average nerdy genius, he was a smart genius!)

There were at least three serious relationships in Einstein’s life. The first happened when he was a mere lad of seventeen – he fell in love with his landlord’s daughter. Next, he fell in love with Milveca Maric at the University and married her. Finally, he divorced Milveca after 11 years of marriage, and married Elsa Lowenthal – who he had been romantically involved with, even while he was married to Milveca. (Being the genius he was, I guess problematic relationships are expected of him – if nothing else, they enhance his aura.)

Upon Death: “I want to go when I want. It is tasteless to prolong life artificially. I have done my share, it is time to go. I will do it elegantly.”

Upon Religion: “The word God is for me nothing more than the expression and product of human weakness, the Bible a collection of honorable, but still purely primitive, legends which are nevertheless pretty childish.”

Upon being Recognized on the Streets: “Pardon me, sorry! Always I am mistaken for Professor Einstein.”

Here are some more interesting quotes from Einstein:

Read more about Einstein at: http://www.amnh.org/exhibitions/einstein/life/index.php