It’s almost here! Toonsie Roll debuts on the App Store this Saturday…on November 22, 2014! So when you wake up this Saturday, checkout the App Store and download the smartest Caricaturing App (I’ve worked really hard to make this app as intuitive as possible, so please forgive the vanity ☺)

If you think you might forget, and you’d like to put me to the task of reminding you, please use the contact form on this page, and I’ll send you an email with the App Store download URL.

Without mincing any words, Toonsie Roll is an app that helps you intuitively create cool caricatures from photographs!

For the experimental reader of my blog, here’s the process in a nutshell.

Just get a picture in Toonsie Roll (shoot from your camera or import from your Albums,) crop it to center the face (give the face about 1/3 to 2/3 space in the picture,) and hit “Toonify.” Toonsie Roll Toonifies the picture and presents you with 3 toonified options. You’ll intuitively know which one’s the best. If you like one – tap that toon; if you don’t, then tap the “More” button to get more options. When you tap a toon, Toonsie Roll takes it as the picture that you now want to toonify further, and then presents three more options based on the selected toon. This is how you continue – until of course, you are done with tooning, and you finalize the image to “Artify.”

And now, for my details-oriented audience, here is the process – Step by Step, screen-by-screen!

Download Toonsie Roll to you iPhone or iPad and tap the icon to open it. (Don’t rap me on the knuckles for being cheeky. You wanted it step by step!)

You get the following Opening Screen.

Just tap anywhere to load the “Get a Picture” screen, shown below.

You can get a picture into Toonsie Roll by either importing from “Photos” or by shooting one then and there, using your device camera. (The second option is pretty useful when someone in your group is being a real nutcase.)

Now move and adjust that red-rectangle on the image to select the face. It’s a good idea to keep the face centered (you get interesting results by being off-center, but when you are starting, it’s a good idea to stayed centered.) Also, let the face occupy about one-third to two-third of the final cropped image area.

When you are satisfied, hit the Toonify button to arrive on the “Toonify” screen, which is shown below. 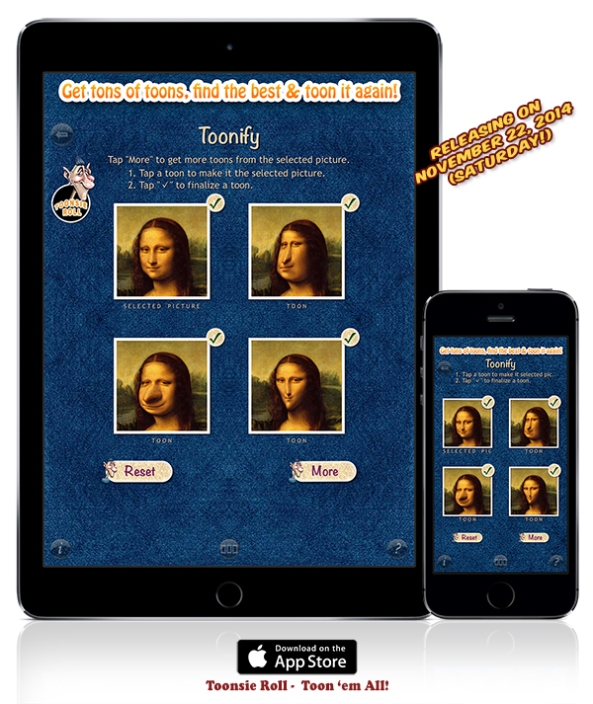 This is the screen where you get to play around with different possibilities. The original image is at the top-left corner (Selected Picture). The other three are the Toons that Toonsie Roll has generated. If you aren’t satisfied with any of them, tap the “More” button. If you like any of the three toons then select the one that’s closest in likeness to the original subject, and one which you’d like to caricature some more by tapping the face in the toon. You’ll see that the tapped toon moves to the top-left and replaces the original and now becomes the Selected Picture. Now this picture becomes the image to be toonified further.

When you are satisfied with one of the toons, tap the green tick on that toon to finalize it. When you hit the tick mark, you get the chance to crop the image once again (if you’d like to) and then you arrive at the following “Artify” screen where you can enhance your artwork with 20 artistic effects.

I’ll be posting a separate tutorial on how these effects can be used individually or one-after-the-other to create interesting artistic effects. At this point, my recommendation is, “play with the effects.”

On this screen you see three ways to personalize your creation.
• Sign your creation (Actually write/draw your unique signature – all great artists sign their work.)
• Add an emoji (from a cool collection of 75 emojis.)
• Add a witty caption to your artwork (In the above screen, “You know you are famous when the Internet explodes with your caricatures,” is the caption added by the artist.)

Once you are done with personalizing the artwork, tap the “Share Your Creation,” button and share your artwork on a social network – Facebook/Twitter etc. of your choice, save it to your iPad/iPhone, or email it 🙂

UPDATE: Toonsie Roll is now available for download on the App Store

This is my desk,
A portrait in oils. Finished, framed, delivered. And it made the family very happy. Size: 40”x30” oil on canvas. @amit.srivastava.art Thank you :) #portrait #portraitstream #portraits #oilpainting #portraitpainters #portraiture #indianartist #indianportraits #portraitartist #artwork #artofinstagram #artistsoninstagram #canvasart #oiloncanvas
“Can’t stay together, can’t stay apart.” The doodler attacks my toned paper. #art #artwork #artofinstagram #artistsoninstagram #trees #treeart #love #marriage #fights #life #argument #penandink #doodling #doodlingart #doodler #indianartist #indianart #indianartists #impossible
You know what this means... :)
Introducing my art site. The writer insisted that I have one...and you can see why. She’s all over it. Here’s the address. ShafaliRAnand.art #indianartists #artphilosophy #artistsoninstagram #art #oilpainting #oilpaintings #whatisart #artistoninstagram #artists #indiancontemporaryart
Happy Ganesh Chaturthi. Got a bit carried away this morning and a doodle became a slightly more serious sketch. Wishing everyone a great year ahead. #ganeshchaturthi #ganesha #ganesha #lordganesha #lordganesh #sketching #drawing #penandink #art #penandinkdrawing #artforsoul #artistsoninstagram #indianartists
The colors of life. Painted this from life. #photoshop #flowers #digitalpainting #colors #gray #lifequotes #lifequotestagram #happiness #paintingflowers #stilllife #stilllifedrawing
Poignant beauty. And with this I declare the end of my sketching spree. #mushrooms #deadwood #cycleoflife #beauty
Growing together...helping one-another, ignoring the shadows. See the close up for details. Tell me, do you see them? Men, women, forces, shadows? (Inspired by the tree trunk that you see on my screen.) #sketches #morningmotivation #morningwalks #seeing #together #family #community #shadows
Sometimes you see more than there is...sketches this yesterday. The tree that inspired this drawing can be seen on my screen. Gifted the drawing to the gentleman who sold me the pen. #sketching #sketch #doodling #trees #morningwalk #shapes #drawing #inspiration
Dead tree and live mushrooms...from a walk in the park. Same pens (black and red) same artist. Those mushrooms take me back to my childhood in #meghalaya #jowai. This is also why I love the rains so much. Have a Great Day! #sketching #doodling #mushrooms #art #artist #morningwalk #nature #nostalgia
And I told myself, “When you try to reach the stars while staying rooted...grounded, you twist and turn and stretch but all you accomplish is an achy bundle of torn tissue. If you want to fly high and touch the sky...don’t stay rooted to your inhibitions and fears...” Some wild doodling with a 10 rupee pen bought today. #sketching #doodling #tiedup #penandink #penandinkdrawing #penandinkart #nothingserious #ambition #fear #fears