Who is more evil – Adolf Hitler or the Devil? 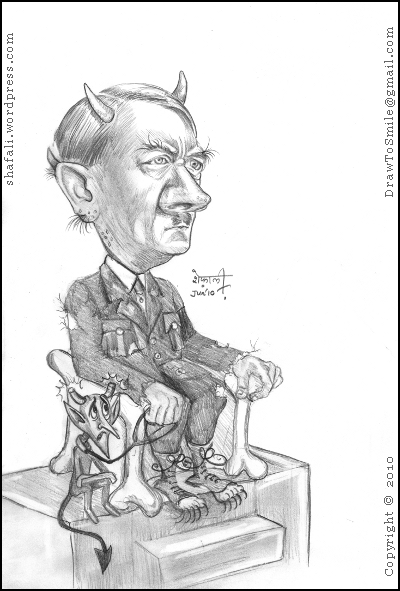 Adolf Hitler, the Nazi Dictator and the chief perpetrator of the Holocaust, was born on April 20th, 1889 (a black day that year) in Austria. Hitler didn’t do well in school and while his father dreamed of his becoming a government employee, he wanted to be an artist. He tried getting into the Vienna Academy of Fine Arts, but the selectors out there weren’t much impressed by his drawings. They did suggest that he could try becoming an architect (his architectural drawings were indeed better than the other stuff he did.) Unfortunately, his qualifications fell short of what was required for studying architecture.

To cut a long story short, Hitler worked on some menial jobs for a while and then he joined the German Army. It was in 1919, when a 32-year-old Hitler discovered that he has the gift of gab. Hitler’ audience often comprised rowdy thugs, but they gave him the confidence to launch the National Socialist German Workers or NAZI Party in 1920. In 1932, the NAZI party was democratically elected as the largest party, and in 1933, Hitler gained complete control of the party.

Then began the worst nightmare the world had ever seen. By 1945, the Nazis had systematically murdered 17 Million Civilians including 6 Million Jews. Other communities that were targeted by the hatred-driven Nazis were Poles, Russians, Romanis, and even people who were disabled. The atrocities that were committed by Hitler’s satanic army remain unparalleled in history. If there truly were a devil, he would bow to Hitler and abdicate in his favor!

Adolf Hitler’s Hatred for the Jews:

It’s often argued that Hitler had Jewish blood in his veins. His grandmother worked in a rich Jewish household and conceived Alois, Hitler’s father, through the one of the male members of this family. Five years after giving birth to Alois, she married Johann Georg Hiedler (or Hitler) who gave Alois his name. There’s a possibility that Hitler’s hatred for Jews was a lot personal than he ever accepted it to be.

Hitler fell in love with an Army Officer’s daughter when he was young, but her never had the nerve to speak to her. He did follow her around for a long time. In 1929, he met Eva Braun, a 17-year old starry-eyed teenager. Hitler didn’t marry Eva until two days before they committed suicide together in 1945.

Going by what sells in the name of art today, Hitler was a better artist than most. Unfortunately for the world, he was a better orator. In addition to being a great orator, Hitler was a man with no conscience nor empathy for his fellow beings – yet he was passionate about whatever he did – even when he killed – he killed with passion. You can see Hitler’s artwork here. (Do you notice the irony? Had this man become an artist and had been able to sell his drawings, he probably wouldn’t have become a butcher; yet, because he became the dirtiest butcher in the world, his drawings now sell!)

Hitler loved dogs – especially German Shepherds. Eva Braun once commented upon Hitler being more in love with his dogs than with her.

Mein Kampf or My Struggle is Hitler’s autobiography. When you read this book, you experience the madness setting in. The first volume makes some sense while the second, none.
Mein Kampf is available here.

The mass extermination of Jews and other non-Germans by the State of Germany is called the Holocaust (it is also called the Final Solution). The extermination was carried out in phases. Men, women, and children were put into gas-chambers under the pretext of a shower, and were gassed. Children were often used as guinea-pigs for devilish experiments. People who were identified were dispatched to the Nazi concentration camps that had the motto “Work will set you free” on their gates. Auschwitz is said to be the worst of all the concentration camps.

When Hitler arrived in Hell, he must’ve put the Devil in a gas-chamber (or at least on a leash) and ruled Hell…after all, who could be more evil than Adolf Hitler?