Now that I think of it, I don’t really caricature business-people for fun. I did a couple of Mark Zuckerberg‘s, one of the Automattic CEO Matt Mullenweg‘s, and that is about it. Oh, I also did a commemorative caricature of Steve Jobs for a business magazine long ago, but I didn’t post it here. I did Zuckerberg’s and Steve Jobs‘ as commissions, and Matt Mullenweg’s as a Thank You Note for building WordPress. Today, I drew/painted (it’s a partly painted sketch) Bezos, because I received David Farland’s Daily Kick in my mailbox and it mentioned the Hachette/Amazon battle. I saw Bezos’ name in the email and was suddenly reminded of his face, which is actually quite funny. He doesn’t look like a businessman at all.

Here’s what I painted. 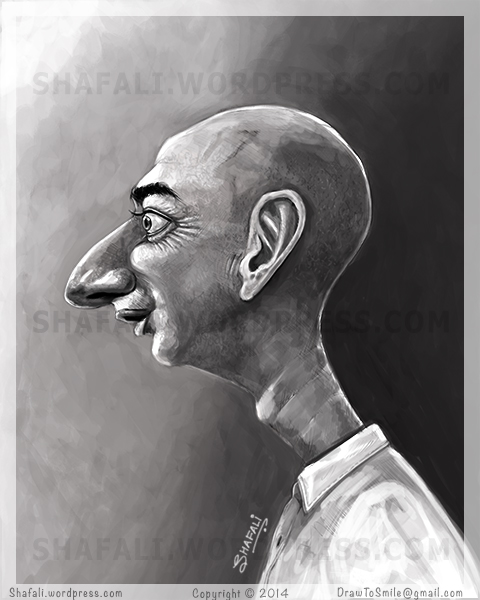 The Next Big Idea?

A Little about Jeff Bezos:

Bezos was born in 1964, which makes him about half-a-century old. He was a smart kid who liked to dissemble and assemble stuff. Bezos comes from a Richie-rich background. His maternal grandfather owned about 10,000 square km of land, but in my opinion Grand-dad was somewhat stingy, because despite having such huge tracks of land, he started Amazon.com from his “garage.”

But the lack of space didn’t deter Jeff and he ended up making Amazon.com what it is today – you know what it is. It’s the online paradise of shoppers, it’s the answer to the prayers of self-published authors, it’s a company with a market capitalization of 146.37B!

According to Forbes (http://www.forbes.com/profile/jeff-bezos/) in 2013 alone Jeff Bezos became richer by $13 Billion! In November 2013, he sold just 1% of Amazon’s stock and got 260 Million for it. So, this cute, deliberately bald, funny looking gentleman is one of the richest men on the planet (#12 on Forbes 400 list.)

Bezos is a libertarian (please do not confuse the term with libertine…though some who search for “Jeff Bezos Creepy” would only be too happy to accept the latter meaning.) His personality leaks from the first name he thought up for Amazon (relentless.com.) His biological dad John Jorgensen discovered that he fathered a billionaire quite late in life. Bezos is considered to be a micro-manager…oh, and his awesome laughter? He inherited it from his biological dad. (source: http://www.hollywoodreporter.com/news/10-things-you-didnt-know-649386)

Bezos is here because…well, I guess I love oddballs; and also because without Amazon, I wouldn’t have published “Evolution of a Caricaturist“. 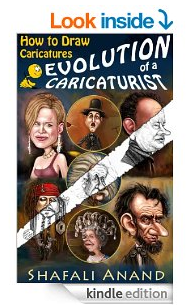