Cannibalism evokes in us a morbid curiosity about what could make a person eat another. It throws us into the dark alleys of a pervert’s mind, a strange and mysterious place that we don’t understand, and that makes us feel ashamed of not wanting to leave. We are drawn in – enthralled in the sticky tentacles and the poisonous fangs of a mysterious evil.

Hannibal Lecter – the Cannibal who riveted us through his checkered personality in The Silence of the Lambs has always given me a slip, until now. I would still say that Anthony Hopkins cannot be caricatured to look ridiculous. You can caricature him to look scary and even evil, but making him look ridiculous, is almost impossible. I prefer my caricatures to bring mirth through mild ridicule – I don’t like to make them ugly, gory, dark, or evil. While I try to stay true to the basic premise of caricaturing, which is – exaggerate the prominent…I’d rather not exaggerate moles and black-heads, or stained teeth, or even the evil, blood-curdling look that turns the suave Anthony Hopkins into a slick and nasty Cannibal called Hannibal.

Ladies and Gentlemen, with all humility, I present Anthony Hopkins in his most memorable role of Hannibal Lecter, feasting upon a freshly fried brain. 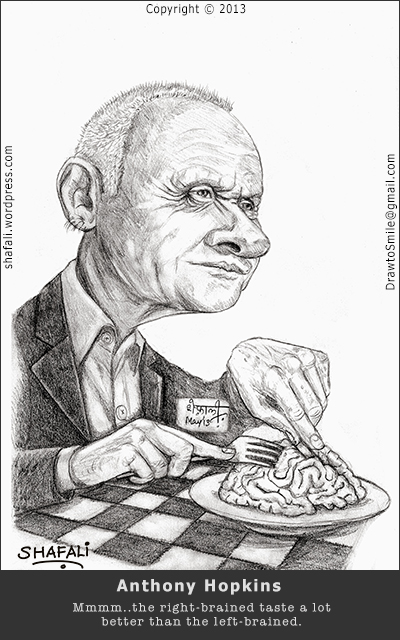 I think there’s a bit of superimposition of personalities in the caption – I’d like to believe that the right-brained are more interesting than the left-brained and so Mr. Lecter must find the brain of the right-brainers tastier. Something that only he can confirm, and I have a feeling that he doesn’t read my blog.

He was born on the New Year’s Eve of 1938, in Wales. Baby Hopkins wasn’t really the brightest kid in the class (the traditional education system doesn’t love the right-brained.) The boy preferred to draw and play music, which obviously aren’t traits that mark the bright kids of the world. He discovered his love for acting when he was a teenager and promptly decided to do the right thing, which is enroll himself at a college of Dance and Drama. Hopkins is a believer and he denounces atheism. He won his Oscar for his role of Hannibal Lecter in The Silence of the Lambs.

Hannibal Lecter was first unleashed on the world in 1981, when Thomas Harris wrote his novel “Red Dragon”. The four novel series, “Red Dragon,” “The Silence of the Lambs,” “Hannibal,” and “Hannibal Rising” has been made into the film-series that we know so well.

The gist of it is that Hannibal had a terrible childhood and his sister was hacked, boiled, and eaten – this left an indelible impression on young Hannibal’s mind – one thing led to another and Hannibal became a Cannibal.

What sets the Great Anthony Hopkins Apart from other Hollywood stars?

Anthony Hopkins is different from all other Hollywood Actors because he pursues perfection in his chosen profession. He prepares for his roles beforehand. He memorizes his lines and then delivers them first-time-right. He doesn’t believe in rehearsing his act. And… listen in, he keeps his memory in shape by memorizing poetry and plays.

A few minutes ago this morning —- When I came to my desk to work, this little guy was there waiting to say hello...or was he a spy working for me in a parallel world, trying to steal my next story? I suppose it was the latter, or why would he disappear so quickly after being spotted?
Dividers in notebooks are great places to doodle :) #art #doodle #doodleart #sketching #sketches #roughsketch
It’s ok. #bleedingheart #bleedinghearts #flowers #flowerpainting #stoneheart #heartofstone #feelings #softhearted #heartart #digitalart #digitalpainting
Transparent thoughts are the sign of a pure heart.
Inspired by god knows who...
The years that separate us. I finished a MS meets call and found myself staring into my own eyes...and saw in them the years that separate us. Make of it what you will and feel what you will...your years are yours to feel and mine are mine. #poems #poetry #poetrycommunity #poetsofinstagram #writers #writerscommunity #writersofinstagram #writing #heartfelt #feelings #years #today #eyes #heart #thoughts #linespoetry
(This)functional family is now off my radar. Returning to writing tomorrow. #writer #writingcommunity #write #writersofig #artistsoninstagram #artistsofig #artists_insta #familylove #confusion #confusing #madnessoverloaded #cartoons #caricatures
(This)functional family keeps interrupting my work. I guess they want me to finish the drawing. #colorpencil #tonedpaper #cartoons #family #crazyfamily #nothingspecial #nonsense #goodnight
Feeling grateful. Coffee in bed. #coffee #coffeelover #coffeetime #coffeeaddict #cozy #cozyvibes #love #care #alone
Portrait of a Gadaba beauty. This is done in pen and ink. For my tribal portraits. I study the dresses, ornaments, and facial features and then make the drawing. The face in this portrait is my interpretation of beauty given the common features of the Gadaba tribe of India.
Winter gets into your bones.
The new year has officially begun. Bought this diary today :)