This month, I had the opportunity to work on a very interesting assignment – President Obama Crowning himself King 🙂  My regular visitors know that I’ve done at least three Obama Caricatures in black and white (you can find them in the Gallery here,) but honestly, none drip humor the way this does.

Let me start by presenting the artwork. 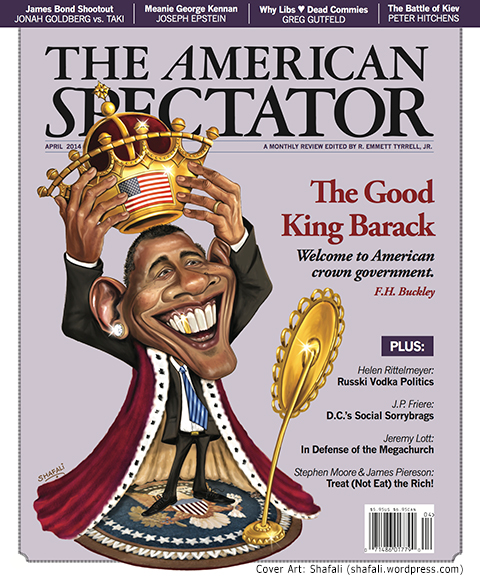 If you are a conservative and you don’t subscribe to The American Spectator, you can explore it here.

Now the story behind the creation 🙂

The Assignment Brief was very clear – Barack Obama crowning himself King, wearing a robe, and could be shown admiring himself in mirror – perhaps a half-figure drawing, and on a solid color background.

When you illustrate for magazines, you walk the tight-rope between design and art. The constraints are important because they set the boundaries for your artwork. So you always begin with the constraints – unlike in Fine Art, where you begin with a concept and allow your artwork to evolve and define its own boundaries.

So the first thing to do was, visualize Obama on the cover – with a solid color background. The solid background made it essential that I visualized the entire color palette within the main figure.

Check out the play of primary colors. The wine-red velvet of the robe and the crown; the golden-yellow of the mirror, the crown, and the tooth – were two warm colors (Red/Magenta, and Yellow)- To neutralize the heat of these two colors, I needed the third primary (Cyan/blue,) and so I decided on a blue tie and offered to paint the Eagle rug from the oval office, under his feet.

That’s how the colors played out, the black/gray/white – the neutrals notwithstanding 🙂

Also note the head/body ratio. In this particular caricature, the expression of glee on the president’s face was the most important element of humor. The body was unimportant – purely a hygiene factor, necessary to define the composition. This is why I went  for a very high head/body ratio – but I kept the hands big – they had to be, to hold such a huge crown.

Here’s a close-up of the Caricature of President Obama. 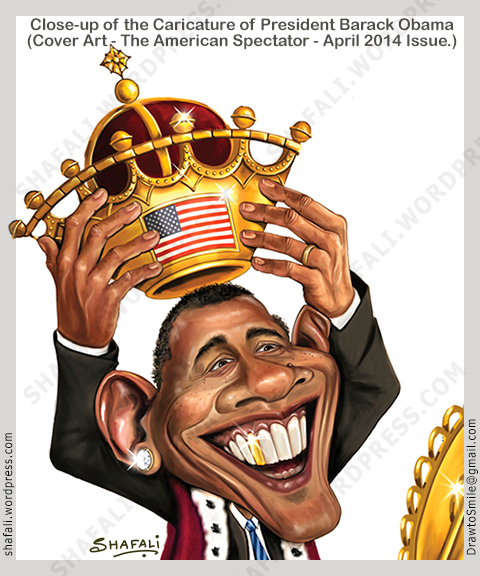 A Few things to note:

As you can see, I added a few ideas to the original brief. It helps to discuss your ideas with the client. Sometimes, your ideas may be tossed out of the window, because they were too “morbid,” or they needed to be “watered down.” Here are a few things that I added – the diamond stud, the gold tooth, the eagle rug, the flag, and if you can find him – a tiny but smooth operator.

The diamond stud in Obama’s ear and the gold-tooth, both are affectations of the rich and they help strengthen the “King” in him. I worked with Obama’s younger and more enthusiastic look – not the older, grayer one…reverse aging is impossible, but in its impossibility it exaggerates the impact of the caricature. I had to do some research on his hands. The color, the veins, and also his wedding band (couldn’t have missed that.) I thought that a crown with a flag would look good too.

If you’d like to learn how to draw caricatures in a methodical way – check out “Evolution of a Caricaturist – How to Draw Caricatures” on Amazon. 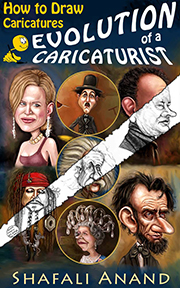 Among all kinds of illustrations, caricatures evoke the highest response from the audience. A caricature achieves this by weaving the spell of humorous likeness around its subject.

This book establishes a logical method to harness the creative madness that results in caricatures. The author calls it the “Feature Frame Method” and illustrates how this method can be used to selectively exaggerate every facial feature.

Evolution of a Caricaturist helps you master the art of caricature drawing by presenting around 75 artworks and technical drawings, and then analyzing the features of more than 30 celebrity faces.

Introducing my art site. The writer insisted that I have one...and you can see why. She’s all over it. Here’s the address. ShafaliRAnand.art #indianartists #artphilosophy #artistsoninstagram #art #oilpainting #oilpaintings #whatisart #artistoninstagram #artists #indiancontemporaryart
Happy Ganesh Chaturthi. Got a bit carried away this morning and a doodle became a slightly more serious sketch. Wishing everyone a great year ahead. #ganeshchaturthi #ganesha #ganesha #lordganesha #lordganesh #sketching #drawing #penandink #art #penandinkdrawing #artforsoul #artistsoninstagram #indianartists
The colors of life. Painted this from life. #photoshop #flowers #digitalpainting #colors #gray #lifequotes #lifequotestagram #happiness #paintingflowers #stilllife #stilllifedrawing
Poignant beauty. And with this I declare the end of my sketching spree. #mushrooms #deadwood #cycleoflife #beauty
Growing together...helping one-another, ignoring the shadows. See the close up for details. Tell me, do you see them? Men, women, forces, shadows? (Inspired by the tree trunk that you see on my screen.) #sketches #morningmotivation #morningwalks #seeing #together #family #community #shadows
Sometimes you see more than there is...sketches this yesterday. The tree that inspired this drawing can be seen on my screen. Gifted the drawing to the gentleman who sold me the pen. #sketching #sketch #doodling #trees #morningwalk #shapes #drawing #inspiration
Dead tree and live mushrooms...from a walk in the park. Same pens (black and red) same artist. Those mushrooms take me back to my childhood in #meghalaya #jowai. This is also why I love the rains so much. Have a Great Day! #sketching #doodling #mushrooms #art #artist #morningwalk #nature #nostalgia
And I told myself, “When you try to reach the stars while staying rooted...grounded, you twist and turn and stretch but all you accomplish is an achy bundle of torn tissue. If you want to fly high and touch the sky...don’t stay rooted to your inhibitions and fears...” Some wild doodling with a 10 rupee pen bought today. #sketching #doodling #tiedup #penandink #penandinkdrawing #penandinkart #nothingserious #ambition #fear #fears
How disciplined. Sparrows. #sparrow #sparrows #morning #morningvibes #morningmotivation #togetherness
Taking a break with #harrypotter - starting with the first book, the nth time. #jkrowling #harrypotterfan #hogwarts #dumbledore #stories #break #readingbreak #readersofinstagram
The Writer’s Block (drawn by an artist who appears to be suffering from the artist’s block.) #writers #writersofinstagram #writerscommunity #writersblock #writing #sketch #sketching #blocks
From the cover of my notebook. Makes me wonder where she’s going with that key? And why the birds behind her are still in their cages? #cage #cagedbird #freedom #flight #key #life #helpingothers #birds #notebooks #writing #writerslife