As this post refers to content that’s covered in the two previous posts of this series, it is recommended that you begin by reading them in sequence:)

This post helps you answer the question – Can YOU become a cartoonist?

This question is contextual, and the context is that of your current abilities. Here’s a continuum that you must find your place on. 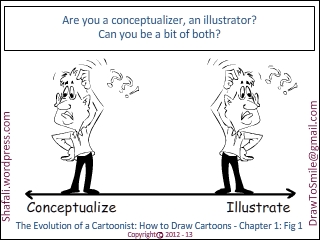 If you are like the guy at the right, you are worried about expressing your ideas in a visual form. However, if you can identify with the guy at the left, you can draw and illustrate but you worry about finding the right ideas.

The Stronger-half of a Cartoonist – The Conceptualizer

If you are an idea-generation machine but you feel constrained by you drawing abilities, you need to pick up some basic cartoon-drawing skills that can help you do “a relatively simplistic and sometimes exaggerated visual portrayal” of the many ideas that keep rushing in and out of your minds, so that you may capture them into an awesome cartoon. However, if you feel that you are Mr./Ms. Ideo (represented by the day-dreaming gentleman in figure 2 below) – and that no matter how you wield that pencil, you can do no better than create a squiggly, you may want to team-up with an artist, who can  create a picture that goes with your ideas…or perhaps, you could learn to create ultra-simplistic, Dilbert-Style cartoons that can speak your mind.

Mr./Ms. Ideo (The Conceptualizer in the following figure.) needs a visual medium of expression that can be used to capture those ideas that will grow wings and fly away, if they aren’t caught and trained.

The Fairer-half of a Cartoonist – The Illustrator

If you have placed yourself on the right side of this continuum, you must learn not only to generate ideas, but also train yourself on keeping them.  I’ve gone through the learning-to-generate-ideas phases, and I must tell you that it isn’t easy. However, if you are like Mr./Ms. Arto ( represented by the horrendously dressed, lip-smacking (!) gentleman in figure 3 below) you might find that you require considerable practice to ensure that you find your ideas and keep them too. Perhaps a helping hand from a friend who has a fertile mind, could help. Yet if you teamed up right, you could end up creating fantastic cartoons to delight your readers.

Mr./Ms. Arto (The Illustrator in the following figure) can draw, but he faces issues in finding the right ideas and visualizing them in a way that fits them into the cartooning mold.

(This end note is for those bright individuals, who think that they aren’t cartoonists and so they mustn’t create cartoons – and who identify themselves better with Mr./Ms. Ideo, I must mention the Johari window here, which speaks of the “Unknown Room”. Perhaps a comic post on the Johari Window is due on this blog, but for the time-being, it should suffice you to know that the Unknown Quadrant of the Johari Window, now called the Unknown Room, refers to your traits and skills that nobody know anything about, but they exist.

My advice here is that because you nor anyone else knows that they exist, just assume that they do (with due apologies to Mr. Joseph Luft (Jo) and Mr. Harrington Ingham (Hari) this is how the twisty logic of this caricaturist interprets it.) Dear Reader, possibly one of these unknown skills within you is the skill of cartooning…and nobody, not even you is aware of its existence, so dig it out! Surprise yourself, and surprise the world. Oh…and if you want to take the Johari Window Test, click here.)

Cartoons have a mysterious power to reach into the hearts and minds of people, and shake them out of their stupor.  Before we move on to the apparently more practical matter of explaining what a cartoon is, I must mention the fact that sometimes the cartoons that change the face of the world, don’t come from the cartoonists. We’ll discuss the reason behind this anomaly later, but let me share an example to corroborate my viewpoint.

Benjamin Franklin, officially created the first American political cartoon in 1754, which depicted a snake severed into 8 parts with a caption “Join, or Die” to bring together the colonies – thus, sowing the idea of the United State of America, in the minds of the people.

Franklin is considered to be one of the founding father of the United States –  among other things, he was an author, politician, scientist (he invented the bifocals and the Franklin Stove,) and a musician. Did you read the term cartoonist anywhere?

Reflect upon it while I disappear to bring you the second chapter of this book “Evolution of a Cartoonist” or the fourth post in the series. I hope this book will sow the seeds of cartooning into your mind, and motivate you to express your ideas in this delightful visual format.