But when Malcolm Gladwell, the author of several non-fiction super-sellers such as The Tipping Point, Blink, and Outliers, did those smart and sarcastic tweets on John Paulson’s donation to Harvard, some low-thinking individuals tried to bring the house down upon his head. (Read: Malcolm Gladwell just went nuts on a Wall Street billionaire’s $400 million donation to Harvard) 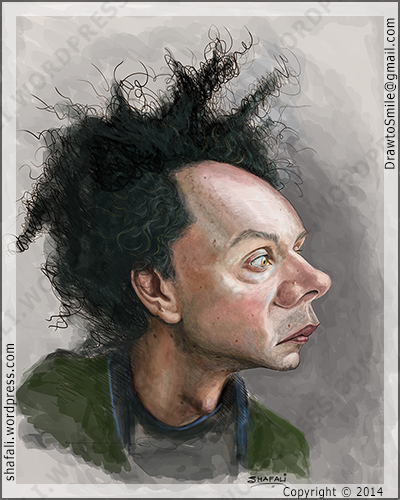 Here are some of his tweets: 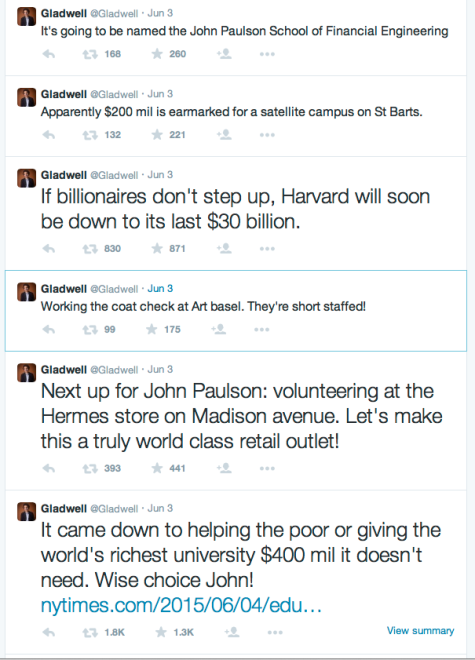 He’s got all the right in the world to drag Paulson’s name through the mud. After all, even I deserve that $30 Billion more than Harvard does. Why? Because I don’t have a billion, or even a million. I am so much poorer than Harvard – and that makes me more deserving of Paulson’s 400 Million donation.

Twitter has played cupid and made me fall in love with Gladwell who has said what I’ve been saying all along – albeit a bit differently, and a lot more humorously. People who can buy diamonds, shouldn’t buy them for their loved ones; people who have amassed a fortune, shouldn’t leave it their families – why? Because those loved ones are rich too…and hence they aren’t deserving enough – there are enough who are poorer (poverty being a relative concept,) and they must become the heirs to the rich.

There’s a pitfall in my reasoning though and that becomes my first argument in favor of what Paulson did. (Gasp again – I mean, how could he give it away all to Harvard? but I’ll reserve the whining for later…)

Most people are motivated to earn because they feel they have the right to decide how they must dispose their earnings – and most people prefer to spend their money on those who they love or care about. Recall that self-actualization need comes after family and belongingness needs (Abraham Maslow) – and your alma-mater is…well, your “nourishing mother” and hence family. John Paulson admits that he owes his unprecedented success to Harvard – and so he decides to gift “some of it” to his foster mother, who’s already rich no doubt, but who can still use that money to help her other “children” through life. How in the world does this compare with donating for the cause of poverty?

This of course, is one viewpoint.

Argument 2: I’d rather help those who can help others.

Another viewpoint is that – helping the ones who can help others results in greater benefit to mankind. So if Paulson thinks that his alma mater could find a good use for his money – he is actually investing in the future of mankind – and that in itself is an act of philanthropy. If an institution consistently produces billionaires and multimillionaires and they donate a part of their wealth for the poor of the world – the poor get more.

For the third argument in Paulson’s defense, I would like to say that who one must donate to (or whether one must donate at all) is a personal choice – and giving money to an educational institution has a far greater impact on humanity than any other kind of donation. True that the impact may not be as immediate as in the case of donating food and health supplies, yet someone has to do it – or in a few centuries from now, we’d all have reverted to growling and snapping at each-other’s heels…we’d be back to living a life centered around fulfilling our basic needs.That would wipe the artists and the writers out of existence. And neither Mr. Gladwell nor I would like that. (Excuse my quick and distorted but inevitable time warp example. I am a caricaturist and I thrive on exaggeration, which brings the imperfection into sharp focus.)

But all said, I am still in love with Malcolm Gladwell – and I defend his right to tweet his thoughts. They are an exact echo of my thoughts, and I thank him for putting them across – because his words are stronger (and far more retweetable) than mine. I too would’ve preferred that John Paulson had directed at least a quarter percent of his donation towards me – the rest could go to poorer folks, along with the donations made by a zillion other billionaires and organizations.

And to top it all…Harvard just doesn’t need that money. The keyword here is “need,” you see?

You know what this means... :)
Introducing my art site. The writer insisted that I have one...and you can see why. She’s all over it. Here’s the address. ShafaliRAnand.art #indianartists #artphilosophy #artistsoninstagram #art #oilpainting #oilpaintings #whatisart #artistoninstagram #artists #indiancontemporaryart
Happy Ganesh Chaturthi. Got a bit carried away this morning and a doodle became a slightly more serious sketch. Wishing everyone a great year ahead. #ganeshchaturthi #ganesha #ganesha #lordganesha #lordganesh #sketching #drawing #penandink #art #penandinkdrawing #artforsoul #artistsoninstagram #indianartists
The colors of life. Painted this from life. #photoshop #flowers #digitalpainting #colors #gray #lifequotes #lifequotestagram #happiness #paintingflowers #stilllife #stilllifedrawing
Poignant beauty. And with this I declare the end of my sketching spree. #mushrooms #deadwood #cycleoflife #beauty
Growing together...helping one-another, ignoring the shadows. See the close up for details. Tell me, do you see them? Men, women, forces, shadows? (Inspired by the tree trunk that you see on my screen.) #sketches #morningmotivation #morningwalks #seeing #together #family #community #shadows
Sometimes you see more than there is...sketches this yesterday. The tree that inspired this drawing can be seen on my screen. Gifted the drawing to the gentleman who sold me the pen. #sketching #sketch #doodling #trees #morningwalk #shapes #drawing #inspiration
Dead tree and live mushrooms...from a walk in the park. Same pens (black and red) same artist. Those mushrooms take me back to my childhood in #meghalaya #jowai. This is also why I love the rains so much. Have a Great Day! #sketching #doodling #mushrooms #art #artist #morningwalk #nature #nostalgia
And I told myself, “When you try to reach the stars while staying rooted...grounded, you twist and turn and stretch but all you accomplish is an achy bundle of torn tissue. If you want to fly high and touch the sky...don’t stay rooted to your inhibitions and fears...” Some wild doodling with a 10 rupee pen bought today. #sketching #doodling #tiedup #penandink #penandinkdrawing #penandinkart #nothingserious #ambition #fear #fears
How disciplined. Sparrows. #sparrow #sparrows #morning #morningvibes #morningmotivation #togetherness
Taking a break with #harrypotter - starting with the first book, the nth time. #jkrowling #harrypotterfan #hogwarts #dumbledore #stories #break #readingbreak #readersofinstagram
The Writer’s Block (drawn by an artist who appears to be suffering from the artist’s block.) #writers #writersofinstagram #writerscommunity #writersblock #writing #sketch #sketching #blocks