I’d like to begin by apologizing for my long absence from blogging. While I could write unbelievable yet true stories about my being abducted to Atlantis or my journey into and out (no, not that way,) of a polar bear’s belly, but I have changed. I have transformed into a serious, good-for-nothing, dreamy-eyed artist, and so I must tell you the truth. I was busy, and I still am, but I was so ashamed of my tardiness that I decided it was time that I made this post about Just-in Bee-burr!

If you are below 18, you may try to scratch my eyes out for caricaturing your heart throb, the oh-so-cute Bee-burr, but the adults of this world, the ones who really count (in my opinion,) will appreciate my ability to recognize, and then remember this young boy with diamond earrings and…well, a thatch of golden hair that keeps changing its direction. You see, at my age, all kids begin to look-alike.

Here’s his caricature with his golden hackles up! 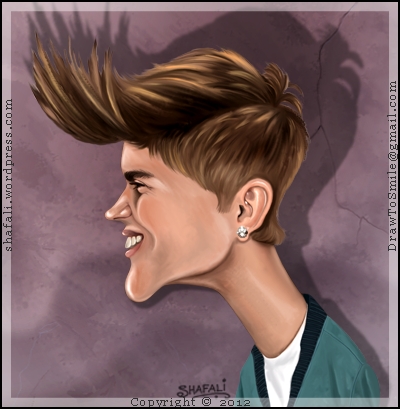 Don’t get me wrong. I love the boy. He’s neat and clean, and cute, and he’s even finished High School in order to please his mom (who’s quite young herself.) I’d say that his achievement of becoming a multi-millionaire at this tender age is dwarfed by these other important achievements. I mean, kids his age try their best to look as shabby as a porcupine that’s been out all night, and they compete to find the most effective method to make their parents unhappy. But Bee-burr isn’t like all other kids and moms would be mighty pleased to see their kids emulate him.

A Quick Bio of the Teen-Icon Justin Bieber

Just-in burst upon the American music scene when he was barely thirteen! Moms, tune in…this is how it happened. Justin’s mom made YouTube video of her son’s performance in a local singing competition. Now, there’s this particular African-American genre of music that originated in the 40s called Rhythm and Blues (lazily called R&B), and young Bieber sang in this genre. Now a gentleman called Mr. Scooter Braun discovered one of his videos and figured that the boy had talent, and so he found him out and then scooted him away to Atlanta. The rest is…as I’d say, recent history, and full of mind-boggling details too! So, if you’d like to boggle your mind, tap the mother lode of all information here.

“I am all ears.” Back to my regular routine. Back to work. Would love to thank everyone who visited my art show and shared their feelings. Thank you. You were the life of the show. #art #ears #doglovers
It ends today. It was fun :) #art #artshow #indiahabitatcentre #delhievents #oilpainting
My solo show “Within” is currently on at the Open Palm Court Gallery, India Habitat Centre, Lodhi Road, New Delhi. It started yesterday and shall go on till 8 pm May 11th, 2022. It has twenty of my oil paintings on display.. If you are in Delhi during this time, do find time to visit. I’ll be at the venue and would love to receive you. #art #artexhibitions #artshows #delhievents #fineart #oilpainting #indiahabitatcentre #delhievent #paintings #artcollectors #artcollector #artlovers #indianart #indiancontemporaryart
Found this on the sidewalk. Can you tell what it is? What’s your guess? #puzzle #question #lostandfound #quiz #quizinstagram
A 6” sq swatch from the 4ftx5ft painting I am working on for my upcoming show. #oilpainting #art #artistsoninstagram #indianartist #faces #wrinkles #artshows #delhiexhibition #artexhibitions
A view of my Doodle Park where I make my park doodles :) #park #doodleart #doodles #doodlesofinstagram #goodmorning #sketching
The Joker’s Joker - his alter ego with whom he shares all his sordid plans. #joker #joaquinphoenix #psychology #psychopath #hollywood #moviestowatch #fear #madness #portraitdrawing #penandinkdrawing #penandink #artistsoninstagram #art #artwork #thinking #curious
Today’s #doodle. Just finished sketching, sitting here on a bench in the park. #penandink #penandinkdrawing #doodles #shafalianand #trees #hills #hillshaveeyes #livingwithnature #thinking #life #youandme #world #ukrainewar #sadness
Went to a fair after 2 long years…and it was absolutely refreshing. #sarasmela #noidahaat #fairs #craftfair #india #indian #smile #postcovid #backtonormal @barbstrips you’ll love these pictures.
When the doodler hijacks the podcaster’s schedule :) #tabseabtak #shafalianand #schedule #todo #doodling #kinestheticlearning #artistsoninstagram #lists #podcastersofinstagram #mythology #planning
When you own nothing…you sleep like a baby.
Some rough and sad sketching as I witness a sad end. We assume that what we don’t know about and don’t see, doesn’t exist. But everything does because if it didn’t, it won’t be written about. Writers and artists are often born when their experiences and observations can no longer stay bottled within…when they find a weak spot in their shell and come hurtling out…