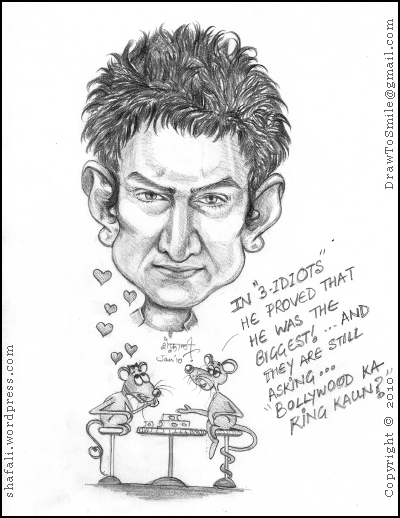 Lost? The Story Behind this Caricature of Aamir Khan:

What you  need to know in order to understand this caricature is that Bollywood is dominated (was) by three Khans. They all came into the industry almost together and India watched their progress with great interest. These three Khans were:

There was a time when the three Khans were in obvious competition.

Born on March 14, 1965, Aamir Khan is one of the most popular actors in Indian Cinema today. He began his career in 1973, as a child actor (who played the character of Ratan, the third brother) in Yaadon ki Baaraat. This film was produced by his Uncle. Thus, Aamir Khan belongs to the first wave of Bollywood Putras (Sons of Bollywood) in Bollywood. In 1988, at the age of 23, Aamir acted as the male lead in QSQT (Quayamat se Quayamat tak), which was made by his cousin.

Aamir however was made for bigger and better things. He turned producer for the film Lagaan in which he also played the male lead – and Lagaan was nominated for the Academy Award. In 2007, for the first time, he turned a director with the movie, Taare Zameen Per (Stars on the Ground) – a movie about the struggle of a dyslexic child. Next he dazzled India with Ghajini (and his young male fans went around sporting the weird hairstyle that you see here.) And then came 3 Idiots – the inspiration for this cartoon.

And so, Aamir won the race with three phenomenal successes in a row, Taare Zameen Per, Ghajini, and 3 Idiots.

Recently, he also received the Padma Bhushan for his work…and right now, as he says on his blog, he is on a promo-tour for his newest film Peepli Live (already in controversy for its song, Mahangai dayan (inflation witch)).

He looks at me with disapproval...all the time. Nothing I do can make him happy. And yet, and yet...
Will sketch, even while watching a movie. #sketch #sketching #pencilsketch #pencildrawings #staedler #staedlerpencils #lefties #artistsoninstagram #cantstop #drawings
This is my desk,
A portrait in oils. Finished, framed, delivered. And it made the family very happy. Size: 40”x30” oil on canvas. @amit.srivastava.art Thank you :) #portrait #portraitstream #portraits #oilpainting #portraitpainters #portraiture #indianartist #indianportraits #portraitartist #artwork #artofinstagram #artistsoninstagram #canvasart #oiloncanvas
“Can’t stay together, can’t stay apart.” The doodler attacks my toned paper. #art #artwork #artofinstagram #artistsoninstagram #trees #treeart #love #marriage #fights #life #argument #penandink #doodling #doodlingart #doodler #indianartist #indianart #indianartists #impossible
You know what this means... :)
Introducing my art site. The writer insisted that I have one...and you can see why. She’s all over it. Here’s the address. ShafaliRAnand.art #indianartists #artphilosophy #artistsoninstagram #art #oilpainting #oilpaintings #whatisart #artistoninstagram #artists #indiancontemporaryart
Happy Ganesh Chaturthi. Got a bit carried away this morning and a doodle became a slightly more serious sketch. Wishing everyone a great year ahead. #ganeshchaturthi #ganesha #ganesha #lordganesha #lordganesh #sketching #drawing #penandink #art #penandinkdrawing #artforsoul #artistsoninstagram #indianartists
The colors of life. Painted this from life. #photoshop #flowers #digitalpainting #colors #gray #lifequotes #lifequotestagram #happiness #paintingflowers #stilllife #stilllifedrawing
Poignant beauty. And with this I declare the end of my sketching spree. #mushrooms #deadwood #cycleoflife #beauty
Growing together...helping one-another, ignoring the shadows. See the close up for details. Tell me, do you see them? Men, women, forces, shadows? (Inspired by the tree trunk that you see on my screen.) #sketches #morningmotivation #morningwalks #seeing #together #family #community #shadows
Sometimes you see more than there is...sketches this yesterday. The tree that inspired this drawing can be seen on my screen. Gifted the drawing to the gentleman who sold me the pen. #sketching #sketch #doodling #trees #morningwalk #shapes #drawing #inspiration