At the outset, I’ve not watched The Lone Ranger and it’s not for want of trying. Honestly, it’s a tough movie to watch, so it doesn’t surprise me that it won the Golden Raspberry  Worst Prequel, Remake, Rip-off or Sequel award and Johnny Depp was nominated for the worst actor award too.

I’ll begin with my expression of Tonto 🙂 (click the image for a bigger view.)

So who’s this Tonto?

Dead Birds as head-dresses have been around

Dead Birds as Head-dresses have been there in tribes around the world. In a tribe in Kenya, certain rituals require that dead-birds are strung to the head-dresses of the young boys who’ve killed them, in some American Indian tribes, dead birds (including crows and eagles) were worn on the head – and there was a spiritual significance of it.

Tonto’s look & the “I am Crow” painting

Tonto’s look is attributed to a painting “I am Crow” by Artist Kirby Sattler.  Please visit the link to view the painting – and you’ll simply love it. Honestly, I loved Kirby Sattler’s rendering a lot more than the look of Tonto, but then the character of Tonto isn’t that of a serious mature man – it is that of a follower and a slightly funny narrator.

About the dead bird being live in my caricature:

I love them alive. I like to believe that the subject of Kirby Sattler’s “I am crow” communicated with the birds at a spiritual level – and felt them to a point where he felt that he was one of them. When I had sketched Bette Midler as Winifred “Winnie” Sanderson, she too had a live crow on her head.

Caption in reference to her recent tweet (May 16, 2013) about the IRS Raid on the Tea Party office.

A diversion to Game of Thrones

Incidentally, I was also reminded of Bran Stark “is” a three-eyed raven – and who can fly about by transporting his spirit into the crow. Since I wasn’t too keen on Bran Stark (mostly because his face reminded me of a real-live witch,) so I drew someone else – a  Mr. Peter Dinklage as Tyrion Lannister – my top fav among the GoT characters. Here’s he for you. 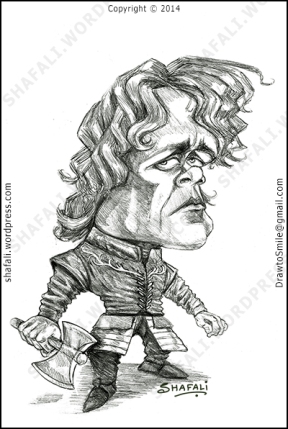 Knowledge and Cunning are my most lethal weapons!

Tonto and the live crow of my caricature

In my part-caricature of Tonto, Tonto is in disagreement with the bird. While the bird has seen more and traveled farther than Tonto, Tonto being human suffers from the I-know-best syndrome. Thus, the bird and Tonto are forever arguing.

Here’s the answer. Don’t you think Jack Sparrow looks rather peachy when compared to Tonto?

I hope you liked my rendering of Tonto and enjoyed this post.
More later 🙂

Pressure-cooked in the corona lock down, feelings made tender, absorbed the news that trickled in and simmered in its aftermath. The effect of the lock down on us, who could stay in the comfort of their homes, was different from that on the ones who couldn’t and found themselves on the roads. For many of the migrant workers of India, COVID-19 became a destroyer of hopes and dreams, and for some it also brought along the fear of starvation. The trickles of their pain froze in our isolated minds and turned into icicles that pierced through our hearts.

About the Great Indian Migration of 2020

On March 24th, 2020, India effected a nation-wide lockdown to control the spread of COVID 19 or the Novel Corona Virus. The lockdown stopped all travel (air/train/buses/autos) and required that people stay inside their houses. According to some estimates, India has about 140 Million migrant workers who travel outside their home-states and work in different industries including construction, garments, hospitality (mostly the unorganized sector – in dhabas and small restaurants,) and others. When India came to a halt on March 25th, these migrant workers faced the biggest dilemma of their lives – whether to stay or to return to their homes. Millions took to the roads and traveled hundreds if not thousands of kilometers. Some were asked to go back, some found ways to continue on their journey, others were stopped at the state-borders and given shelters. Men and women who had left their homes to earn and feed their families found themselves accepting giveaways – their self-esteem left in shreds – so when one man with dried tears in his eyes said, “I hope COVID gets me, because if it doesn’t, starvation surely will,” he spoke for the lockdown-hit Indian migrant worker.

Two days ago (on April 28th, 2020,) the Government promised to bring the migrants back to their home states. It’s not going to be an easy task. It would require the states to work together, but when it’s done, it would be remembered as an act of kindness by the affected migrant workers and also by those whose hearts bleed for them.