Napoleon Bonaparte could’ve changed the destiny of India had he seized Egypt. Indians could be speaking French instead of English, and Delhi would’ve been a replica of Paris! Doesn’t sound all that bad to the Caricaturist. What difference would it have made – our ancestors would’ve died fighting for freedom anyways – my Grandmother would’ve gone to jail during the freedom struggle, anyways… but we’d be a more artistic lot.

But let me not get started on the Indian Freedom Struggle and show you this caricature of the Great Napoleon Bonaparte. 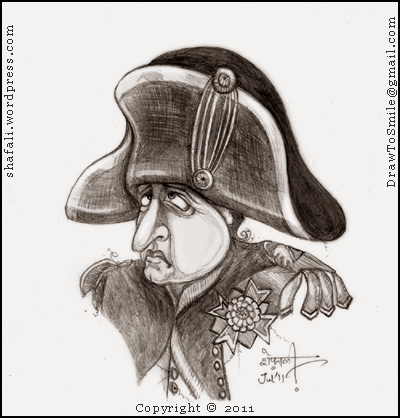 Where’s that idiot who designed this uniform? The hat keeps falling over my eyes, the jacket is too stiff, and the trousers appear to be made of plastic! But hold on…plastic hasn’t been invented yet – right?

Napoleon was born on 15 August 1769 (Note the connection with India’s Independence Day.) and he died on 5 May 1821, when he was barely 53! He spent his short life fighting battles that impoverished France and killed about 3 million people in Europe. Despite this (or because of this) he is considered the greatest military leader ever.

From 1799 to 1812, almost all of Napoleon’s military quests ended in victory and they helped him establish France as a military power to reckon with; but his good fortune ended in 1812, when he invaded Russia. He hadn’t expected the climate to be so unbelievably hostile and that was his undoing. Next he was defeated by the Sixth Coalition and was kept in exile from which he escaped and resumed power. Unfortunately his army was defeated in the Battle of Waterloo, he was captured by the British and he died in captivity – either of arsenic poisoning or of cancer.

But Napoleon isn’t known only for his battles. He’s known for more.

Napoleon was responsible for a lot of other reforms in France. Here are a few of them.

They (the psychologists, who else) say that Napoleon was power-hungry because he wanted to compensate for lack of height. This assumption led them to coin the term “Napoleon Complex” They (the historians of course) incorrectly assumed that this historical giant was five feet two inches in height, while he actually was five feet seven inches – quite tall for his period! The confusion, they say (the mathematicians, who else) happened because Napoleon has instituted a different unit system in France!

What’s life without a little love?
It is said that Napoleon found his love in Josephine who was a widow and also a mistress of one of his associates. Napoleon married Josephine but as he was hardly ever around, Josephine found a lover. This obviously didn’t go down well with Napoleon, who decided that two could play at the game of infidelity. So it all went on and on, until Napoleon divorced Josephine citing the medieval reason – he needed a successor. He then married Marie Louise who gave him a son, who later ruled as Napoleon II for a couple of weeks and then succumbed to TB.

You know what this means... :)
Introducing my art site. The writer insisted that I have one...and you can see why. She’s all over it. Here’s the address. ShafaliRAnand.art #indianartists #artphilosophy #artistsoninstagram #art #oilpainting #oilpaintings #whatisart #artistoninstagram #artists #indiancontemporaryart
Happy Ganesh Chaturthi. Got a bit carried away this morning and a doodle became a slightly more serious sketch. Wishing everyone a great year ahead. #ganeshchaturthi #ganesha #ganesha #lordganesha #lordganesh #sketching #drawing #penandink #art #penandinkdrawing #artforsoul #artistsoninstagram #indianartists
The colors of life. Painted this from life. #photoshop #flowers #digitalpainting #colors #gray #lifequotes #lifequotestagram #happiness #paintingflowers #stilllife #stilllifedrawing
Poignant beauty. And with this I declare the end of my sketching spree. #mushrooms #deadwood #cycleoflife #beauty
Growing together...helping one-another, ignoring the shadows. See the close up for details. Tell me, do you see them? Men, women, forces, shadows? (Inspired by the tree trunk that you see on my screen.) #sketches #morningmotivation #morningwalks #seeing #together #family #community #shadows
Sometimes you see more than there is...sketches this yesterday. The tree that inspired this drawing can be seen on my screen. Gifted the drawing to the gentleman who sold me the pen. #sketching #sketch #doodling #trees #morningwalk #shapes #drawing #inspiration
Dead tree and live mushrooms...from a walk in the park. Same pens (black and red) same artist. Those mushrooms take me back to my childhood in #meghalaya #jowai. This is also why I love the rains so much. Have a Great Day! #sketching #doodling #mushrooms #art #artist #morningwalk #nature #nostalgia
And I told myself, “When you try to reach the stars while staying rooted...grounded, you twist and turn and stretch but all you accomplish is an achy bundle of torn tissue. If you want to fly high and touch the sky...don’t stay rooted to your inhibitions and fears...” Some wild doodling with a 10 rupee pen bought today. #sketching #doodling #tiedup #penandink #penandinkdrawing #penandinkart #nothingserious #ambition #fear #fears
How disciplined. Sparrows. #sparrow #sparrows #morning #morningvibes #morningmotivation #togetherness
Taking a break with #harrypotter - starting with the first book, the nth time. #jkrowling #harrypotterfan #hogwarts #dumbledore #stories #break #readingbreak #readersofinstagram
The Writer’s Block (drawn by an artist who appears to be suffering from the artist’s block.) #writers #writersofinstagram #writerscommunity #writersblock #writing #sketch #sketching #blocks