First, I must save my hide, so please bear with the disclaimer.

These posts aren’t meant to be educational – they merely present the view of an artist. In fact, a specific artist, that’s yours truly. This is why I request you to consider these posts as a work of fiction inspired by historical facts. I am not sure if I can keep the historical facts correct to the t, and I take no responsibility if you fail an exam because you thought you could use my posts to study.

Remember that I am not an art historian, an art critic, or even an art teacher. I am an artist – and in this book (if it becomes one,) I’ll be presenting the history of art from my own tainted and distorted viewpoint.

The Upper Paleolithic Period (or the time between 50K to 10K years ago,) was the time when invading homo sapiens had gotten rid of the neanderthals in Europe and they were doing new stuff all the time. This is why between 1900 and 1950, archaeologists found art done by them. This art was created in material that was easily available at that time, namely animal bones, mammoth tusks, wall-paintings and so on.

In my opinion two extremely important works that have been discovered by archaeologists and that may be classified as art are:
• The Lion Man (made of mammoth tusk)
• The Willendorf Venus (made of limestone colored with red ochre)

And two important inventions of this time are:
• Sewing and shoes (Check out a 50,000 year old needle.)
• Flutes made of bones (Check out some paleolithic flutes.)

We aren’t really interested in the inventions (except when they led to art,) so quite selfishly, we’ll only speak about the Lion Man and the Willendorf Venus.

Putting the Lion Man First (and why?)

While everyone else may disagree with me, I think that the Lion Man or the Lowenmensch figurine, which stands a little more than a foot tall, is the first example of human art. In my opinion, the timeline of art history begins with the Lion Man. 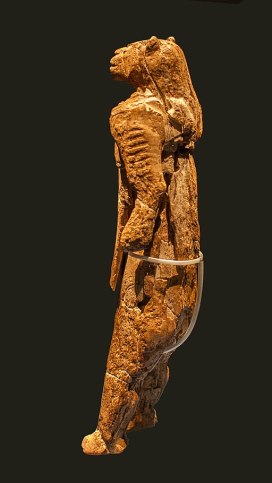 But why is Lion Man Art?

My reasons are simple: The Lowenmensch figurine is an example of human imagination (thus creativity) used to create a visual expression, that has both aesthetic and emotional appeal. The cave paintings are depiction of what was “seen” – and so there isn’t enough imagination, individual or collective, that would make me see them as art.

(Check out Chapter 1 for the definition of art and art history.)

And Why not the zillion Venuses? Why aren’t they art?

Note: Before the term Venus floods your mind with images from renaissance paintings and you start imagining slim and beautiful young women with streaming blonde hair – Read about the Paleolithic Venuses so that you and I are on the same page.

Weren’t the Venuses a Product of Human Imagination?

As an artist I believe that the Venuses (including the Willendorf Venus) weren’t a product of imagination either – mostly because the way their bodies are sculpted, you need to have seen the effect of gravity on a corpulent human body to be able to sculpt that. The Venus of Hohle fels is more from imagination, I think – and yet, it could also be an inability to reproduce the real effect of corpulence, aging, and gravity, merely due to artistic incompetence.

But Willendorf Venus? Isn’t it art? Everyone says it is.

Ok. Let me call Willendorf Venus art but for another reason. I’ll call it art because of its apparent uselessness.  Remember Oscar Wilde had once said: “All Art is Useless.” Since we love to take quotes of famous men and women as gospel truth, we can use Oscar Wilde’s statement to confirm that Willendorf Venus is indeed art. 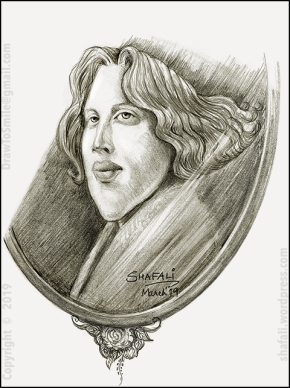 “All art is useless.” – Oscar Wilde

So is the Lion Man a better example of pre-historic art than the Willendorf Venus?

Yes, I believe it is. The head of Lion placed on the body of a man is clearly symbolic and it requires certain degree of imagination fueled by thought. That the lions and the sabers could bring a mammoth down, is something that would make humans revere the Lion and want to be “like” a lion, and from that emanates the creativity that makes such a figurine possible.

This is why for me, dear readers, the art history timeline starts at the Lion Man – and this is why this book and its contents are quite unreliable.

The next chapter (Chapter 3) will tell us the story of the Lion Man’s creation.

As promised a few posts earlier, I’m here with my first post on History of Art.

I believe I must begin by disclaiming all that I’ll be writing in these history posts.

These posts aren’t meant to be educational – they merely present the view of an artist. In fact, a specific artist, that’s yours truly. This is why I request you to consider these posts as a work of fiction inspired by historical facts. I am not sure if I can keep the historical facts correct to the t, and I take no responsibility if you fail an exam because you thought you could use my posts to study.

Remember that I am not an art historian, an art critic, or even an art teacher. I am an artist – and in this book (if it becomes one,) I’ll be presenting the history of art, as an artist.

With that out of our way, let me begin by cobbling together a workable definition of Art History.

Let us begin by understanding Art.

Art is a creative visual expression that is aesthetically or emotionally appealing.

This definition is quite clear if we understand the essence of the term creative.

So now can rewrite the definition of ART as:

Art is an original/imaginative visual expression that is aesthetically or emotionally appealing.

History is defined as the study of the past events.

Now putting together a workable definition of ART HISTORY is quite easy.

Art History is the study of the past of aesthetically or emotionally appealing visual expression that is original or imaginative.

Now equipped with this definition, we can figure out art in our own imaginative way. Instead of focusing on the years (and the complex methodology of presenting those years) and the details of the objects and paintings found (the dimensions, the provenance, and so on…) we will quietly try to slip into the skin of the artist and feel the creation of that art work.

But before we begin, we must get some terminology right.

Tackling the Question of Time:

Note: If you are shaking your head with confusion write large upon your face, you aren’t alone.

Here’s what this cryptic term means:

“c.” is circa (used for “approximately” – often it’s difficult to be exact for the time before humans had invented the calendar and before being historian wasn’t in vogue.)

“ka” is kilo-annum or a thousand years,

so “c. 35 ka” would translate to “approximately 35 thousand years ago.”

Once in a while, you’ll also encounter the term BP, which means “Before Present.” However, the present in this case isn’t right now, but 1950. We’ll stick to ka because when you are dealing with circa in thousands, a few tens of years here and there don’t matter.

Painting in progress for my upcoming art show. The impressions we cast with our brush last longer than we do. #oilpainting #portraitpainting #portraits #art #artshows #delhiart #artgalleries #artmuseum #loveart #artlovers #impressionists
Surprise gift…the kind that makes me smile :) #smile #dreams
It’s good to receive a real, physical, tangible certificate in this digital age. This story is important to me because it was written at the end (hopefully) of a dark chapter in my life. It’s a story of hope and friendship in a dystopian world. I am honestly surprised that it turned out ok. @barbstrips @artieq_1 @amit.srivastava.art thank you. You guys were a beacon of light. #writing #dystopianfiction #writersofinstagram
Saw this heartwarming sculptural composition at the Visual Arts Gallery of India Habitat Centre Saturday evening. Forgot to post it earlier. Amazing talent. #indianartist #indianart #indianartists #visualarts #indiahabitatcentre #sculptures #artlovers #iloveart
Was at IHC last evening and loved most of the works displayed there. Here’s @goswami_shambhunath with his painting on Banaras. He’s also the one who curated the show. If you’ve not been there yet, I suggest that you visit. The show is on till May 31. #banaras #indiancontemporaryart #groupshow #visualart #indiahabitatcentre #art #artists
“I am all ears.” Back to my regular routine. Back to work. Would love to thank everyone who visited my art show and shared their feelings. Thank you. You were the life of the show. #art #ears #doglovers
It ends today. It was fun :) #art #artshow #indiahabitatcentre #delhievents #oilpainting
My solo show “Within” is currently on at the Open Palm Court Gallery, India Habitat Centre, Lodhi Road, New Delhi. It started yesterday and shall go on till 8 pm May 11th, 2022. It has twenty of my oil paintings on display.. If you are in Delhi during this time, do find time to visit. I’ll be at the venue and would love to receive you. #art #artexhibitions #artshows #delhievents #fineart #oilpainting #indiahabitatcentre #delhievent #paintings #artcollectors #artcollector #artlovers #indianart #indiancontemporaryart
Found this on the sidewalk. Can you tell what it is? What’s your guess? #puzzle #question #lostandfound #quiz #quizinstagram
A 6” sq swatch from the 4ftx5ft painting I am working on for my upcoming show. #oilpainting #art #artistsoninstagram #indianartist #faces #wrinkles #artshows #delhiexhibition #artexhibitions
A view of my Doodle Park where I make my park doodles :) #park #doodleart #doodles #doodlesofinstagram #goodmorning #sketching
The Joker’s Joker - his alter ego with whom he shares all his sordid plans. #joker #joaquinphoenix #psychology #psychopath #hollywood #moviestowatch #fear #madness #portraitdrawing #penandinkdrawing #penandink #artistsoninstagram #art #artwork #thinking #curious