Presenting Monalisa who mocks you from a portrait drawn by Leonardo da Vinci. It’s possible that you haven’t heard of Da Vinci, but it’s almost impossible that you don’t know about Mona Lisa and her enigmatic smile.
Here’s The Caricaturist’s rendition of the “Greatest work of Art” in the world. 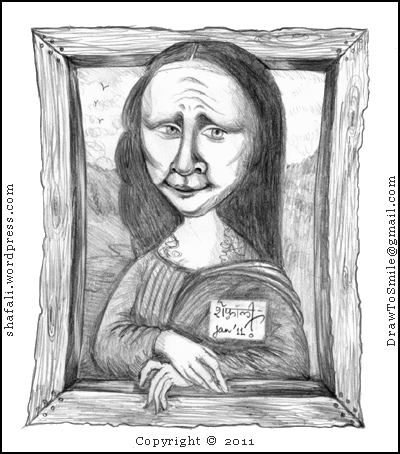 What's behind that smile?

Countless historians have spent countless number of hours, days, and years, trying to answer two questions:
1. Who is Mona Lisa?
2.  What does her smile mean?

What everyone knows is that Monalisa is a portrait done by Leonardo da Vinci, one of the greatest artists of all times, who was really awful at completing his paintings. We’d never know how he motivated himself to complete this one but he managed it somehow. Monalisa won’t have become this famous if about 400 years of its being painted, a patriotic Italian won’t have tried to take it back to Italy, where he thought it belonged (forgetting completely that one of the many King Louis’ had bought it from Salai, the guy who had inherited the portrait from Leonardo da Vinci!) Anyway, Mona Lisa has lived in the Louvre Museum of Paris for most of its life and right now it’s better guarded and protected than the President of the US.

To cut a long post short, let’s quickly look at the possible answers to the two questions that many good people called art historians have spent the best parts of their lives, trying to answer!

Honestly speaking, nobody knows. Here are some possibilities though.
Mona Lisa is:

Why is the woman (?) in the Mona Lisa portrait smiling? What’s behind that smile?

I guess this is a question that people have been asking ever since 1911 – the year in which Mona Lisa became famous because she was stolen.

Of course, interpretations abound; but here’s my viewpoint.
The “person” in the painting is smiling because:

And if these aren’t enough reasons for you to choose from, click here to discover what the experts have to say about Monalisa and her smile.

Amy asked me to leave the caricature untitled – so untitled it is. What in your opinion is the reason behind her smile?