Not many of my international readers would be aware of the three blasts that shook Mumbai yesterday, and left 21 dead and more than a hundred injured. I wonder whether we need to assert ourselves more – whether we need to go after those who are responsible for such dastardly acts that take human lives and tell us that the perpetrators are spineless terrorists who don’t have the courage to fight the way the brave and the righteous do – but who stealthily plant bombs and slink away, while innocent, unarmed people die!

Is this a war they are waging on us?

Or is this some sort of parasitic invasion?

Who are these terrorists? Who are these people who order such cowardly acts? Who are the ones who bring down the twin towers in New York, who repeatedly kill innocents in Mumbai, and who then hide either under the ground or in houses that they don’t even call their own. 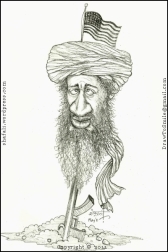 They are the Osamas of the world. When Osama Bin Laden was killed by the US, a symbol of hatred and discord was destroyed. But actually evil goes deeper and spreads unseen by the eyes of the innocents and the saviors – because neither innocence nor heroism dwells in the dirty dark sewers of insanity. So the existence of that evil is discovered in different forms, in different places, at different times; perpetrated by different groups of people who are infected by the same evilness.

India, with its Gandhian Ideology and its secular policies has always been at a cross-roads. How much can we do without stepping out of the Gandhian guidelines of peace, harmony, and non-violence? How much can be achieved without destroying the secular fabric of this nation?

These terrorists, they don’t have love for anyone. They are the ones who’d kill their own spawn if the act could help them in their way ahead. Mahatma Gandhi‘s ideology worked well in ousting the British rulers from India, because they were educated, practical, and could talk rationally. How do you sit down for a talk with an ideology that only seeks to destroy?

With the recent blasts in Mumbai, I find myself withdrawing into a shell. I don’t want to watch the news, I don’t want to look at 4 or 6 or 8 panelists throwing inane paper-planes of ideas on one another, and I really don’t want to read a newspaper that moronically tells me that this evil act was to celebrate Ajmal Kasab’s 24th Birthday or which touts numerology as the reason behind so many people losing their lives.

I am done with all this. I know that I am not too secure either. One of these days, when I am out shopping for a new set of pencils, I might become a victim too. I won’t feel secure, until our Government takes some concrete steps to weed these sickos out of our system and isolate India from the threat of terrorism. Follow the lead of the US – do something. When and why did it become a crime to keep your own people safe?

The question that I ask is – if Gandhi were alive today, and if he had to handle terrorism, would he not modify his own philosophy?   I think that a man of his intellect would know that every ailment has to be treated differently.

6 comments on “Mumbai Blasts 2011: Osama vs. Gandhi – Can we fight Mindless Terrorism with Non-Violence?”

Inspired by god knows who...
The years that separate us. I finished a MS meets call and found myself staring into my own eyes...and saw in them the years that separate us. Make of it what you will and feel what you will...your years are yours to feel and mine are mine. #poems #poetry #poetrycommunity #poetsofinstagram #writers #writerscommunity #writersofinstagram #writing #heartfelt #feelings #years #today #eyes #heart #thoughts #linespoetry
(This)functional family is now off my radar. Returning to writing tomorrow. #writer #writingcommunity #write #writersofig #artistsoninstagram #artistsofig #artists_insta #familylove #confusion #confusing #madnessoverloaded #cartoons #caricatures
(This)functional family keeps interrupting my work. I guess they want me to finish the drawing. #colorpencil #tonedpaper #cartoons #family #crazyfamily #nothingspecial #nonsense #goodnight
Feeling grateful. Coffee in bed. #coffee #coffeelover #coffeetime #coffeeaddict #cozy #cozyvibes #love #care #alone
Portrait of a Gadaba beauty. This is done in pen and ink. For my tribal portraits. I study the dresses, ornaments, and facial features and then make the drawing. The face in this portrait is my interpretation of beauty given the common features of the Gadaba tribe of India.
Winter gets into your bones.
The new year has officially begun. Bought this diary today :)
Taking a blow,
A Dhanata Jaat beauty. Gujarat, India. #tribal #tribalindia #tribaljewelry #tribaljewellery #beautiful #beautifulwomen #penandink #penandinkdrawing #indianart #indianartist #nosering #noserings #eyes
चलो, ख़त्म हुआ यह साल अब,
Today, a year ends.