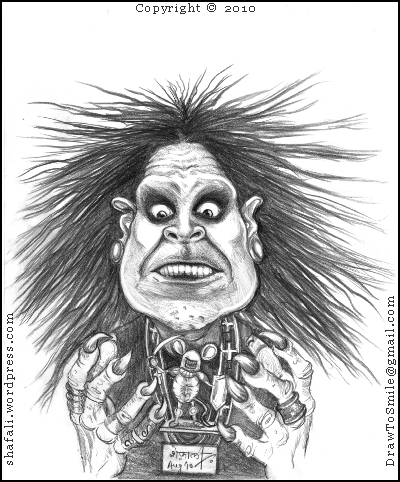 The Rodent Warrior Fights Back!

On December 3rd, 1948; a baby was born who’d father Heavy Metal, and whose music would be “intentionally” dark!

This sweet little baby grew up with dyslexia, a learning disability that has plagued many famous personalities. Obviously his teachers thought nothing of him because teachers prefer average performers, and so he was drawn towards more interesting matters such as stage performances.

Before Ozzy Osbourne began his “black” career, he worked as a laborer, plumber, tool-maker and even a sort of butcher. It’s easy to see how all this work-experience may have been instrumental in the making of the “black” sabbath, and the “heavy metal.” Black Sabbath was born in 1969, and as anything black is usually high in demand and short in supply, it met with a phenomenal success. For obvious reasons, the band was more popular among men.

Moving from gray to dark gray to black to ebony…

And then Ozzy oozed off the Black Sabbath for a solo project he called Blizzard of Ozz (How creative!) Things didn’t work out until 1980, when Ozzy’s wife (ahem! Well yes. Brand new grapevine starting here has it that whenever a woman spent a night with Ozzy in the morning she’d leave looking like Ozzy’s double. Looking at Ozzy’s face in the darkness of the night had that effect on them. (see picture above) – but Sharon survived it all. The next morning she was as pretty as she was the night before – and so Ozzy slipped one of his many rings on her ring finger and they became an item (read: got married.) BTW, Another survivor was his first wife Thelma Rieley. Amazing women – both!

To make a long story short – Ozzy went on singing… there were many other albums…here’s a list (as always thanks to Wikipedia.)

Finally, in defence of Ozzy Osborne and his brave wife Sharon Osborne, they are one of the richest couples in UK. Doesn’t matter if Ozzy looks a little mad. I mean – all the rich of the world are a little mad…he just doesn’t hide his madness…he lets it Ooze out of him ozzily!

18 comments on “Caricature/Cartoon – Ozzy Osbourne of the Black Sabbath – A Visual/Verbal Caricature.”